Kara sat in the dirtiest, darkest tavern in the village of Alarna, surrounded by unhappy thieves.

“This is not good,” Negal said, laying a nearly empty purse down on the table they shared.  “These strangers are not good men.”

“Good men do not hire people to do their thieving,” old gap-toothed Himar said, pushing a cup of weak tea toward Kara.  “Drink, little one.  When you are bigger you can have something stronger.”  Himar was having something stronger.

“They took the stone, but what of us?  They promised us payment, and we have received nothing.”  Negal slammed an empty cup on the table.

“You were promised,” a terrible hissing voice said, from behind them, “a due reward when your work was done.”

Kara tried to duck under the table, but a robed man’s hand clamped down on her collar, hauling her up out of her chair.  The dark-robed men stood at all the exits, keeping Negal’s band of thieves trapped within.  The tall rotting man advanced on Negal, part of his face visible in the dim light, partially desiccated, but oozing.

“Your work for me is not done,” he said.  “You have assembled the specialists I asked for, have you not?  We will need them.  I wish to open a door.”

“I think we can open this,” Djaren said, looking at the door.

Jon examined the moon carving with great interest.  It stood out from the door, and he could wrap his fingers around it.  “I think this turns,” he said.

“Maybe we should wait,” Anna frowned.  “The Professor will be back soon.”

“He should have come back half an hour ago.” Djaren frowned, looking at the fading light.  “If we don’t open this now, we won’t have another chance until tomorrow.” It was true.  The workmen had stopped their digging and gone back to their tents for supper.  The sun was low in the sky, and the Professor had not yet returned.

“We can close it again if it is boring,” Ellea suggested.

“I can’t believe that an Ancient’s tomb could be boring,” Djaren said.  “Go on, Jon.  Try turning it.”

Jon glanced at Tam.  Tam shrugged.  Jon turned the moon.  It gave easily under his hands, turning and locking into a new position.  There was a visible crack now down one side of the door frame.  Jon pulled.  Nothing happened.

“If we tied a rope about the moon, we could all pull together,” said Djaren.

Anna fetched a rope and they fastened it around the horns of the moon.  “If we break this, the Professor is going to be very angry,” Anna warned them.

“We’ll pull carefully,” said Djaren, grinning, “and the Professor will be delighted to see that we found a way to open the door.”

They all pulled together.  After a long, difficult, and sweaty time of pulling and heaving on the rope until their hands were raw, the door stood open a little over a foot.  Anna had a lantern and matches ready, and the others all clustered around her as she lit the lantern and held it up.

They all peered into the narrow opening as footsteps crunched behind them.

“Professor, look, we’ve opened it,” Djaren said, turning.  He yelled suddenly then, and the others turned too.  The corridor was blocked by a group of men in dark robes, and some ragged looking villagers.  One robed man had the pickpocket girl, thoroughly gagged, under one arm.

“You do not want to make so much noise,” one of the men said, in a very odd voice.  “If you make sounds, I will have to hurt one of your small friends.”  The speaker stepped closer, into the glow of Anna’s lantern.  His face, shadowed partially by his hood, was disgusting and rotten; teeth hung from a grey jaw dripping some kind of slime, and his nose was withered and sunken like a mummy’s.

Anna dropped the lantern and clamped both hands over her mouth in order to stifle a scream.

“Good girl,” the rotting man said.  “Thank you all for opening the tomb.  It was very clever of you.  How would you like to see the inside?” 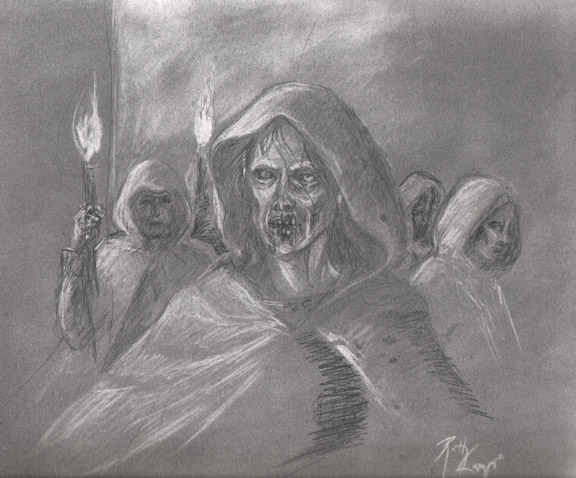 “I think it is time for my thieves to be useful,” the rotting man said.  “Two of you men, go first into the tomb.”

One of the taller ragged villagers stood forward.  “Apologies, lord, but first I would know what payment you propose to reward us for this work.  You have made us many promises, but have yet to give us coins.  We had a bargain.”

“And I have a better one,” the rotting man said, with a harsh croaking laugh.  He grabbed one of the villagers, a very old man with missing teeth and frightened eyes, and gripped him by the throat.  Out from the flesh that the withered and rotting fingers gripped, blackness spread, with veins of sickly green.  The old man’s neck and face turned black, then his chest, and still the veins spread.  He choked and his eyes rolled back.  Red veins running across the whites turned to green and then to a slick and oily black.  The pickpocket girl was kicking the man who held her, furiously.  The rotting man dropped the old villager to the ground, where he fell without a sound, his head at an odd angle to his body, with some kind of dark slime oozing from beneath him.  There was a terrible stench, from the fallen man and from the rotting one.

The other thieves all shrank away from the body.

“I don’t know what you are,” Djaren said, with uneven breath, “or who you are, but you will be stopped.”

“How dramatic.  So like your father.”  The rotting man gave him a horrible smile that showed his cracked lips, rotting teeth, and grey bloodied gums.

Two of the thieves were pushed forward, and entered the tomb nervously.  The others followed at a distance, with torches.

The tomb seemed to begin with a corridor of about the same dimensions as the door.  The thieves walked down it hesitantly into the shadows.

The robed figures followed the thieves, along with the children, except for the six the rotting man directed to guard the door.  Tam held onto Jon’s hand so tight it almost hurt.  Jon held his hand back.  He was glad to have Tam so near.  He could see the pickpocket girl just ahead, slung over a robed man’s shoulder. She looked angry, but scared too.  She saw him watching her and scowled at best she could with a gag in her mouth.

There were cries up ahead and some of the thieves came running back.  “The floor gave way around the corner!  We have lost two men!”

“Then send on the next two,” the rotting man barked.  He turned a milky eye on the children and laughed.  “Once we run out of thieves we will start sending you.  The larger ones first.  The small ones might not have weight enough to set off the traps.”

“You are very bad,” Ellea informed the rotting man.  “I hope bad things happen to you.”

The rotting man paused, considering the little girl carefully.  “You have promise,” he said.  “Power, and promise.  I wonder how you will grow up.  If you grow up.”

The rotting man fixed milky eyes on him next.  “And you,” he said, “are completely worthless.  Too honest, too mortal, too innocent.  Once I could have had a purpose for one such as you, but not now.”

Djaren glanced at the pickpocket girl, and then at the rotting man.  “I guess they didn’t think you were very important.” 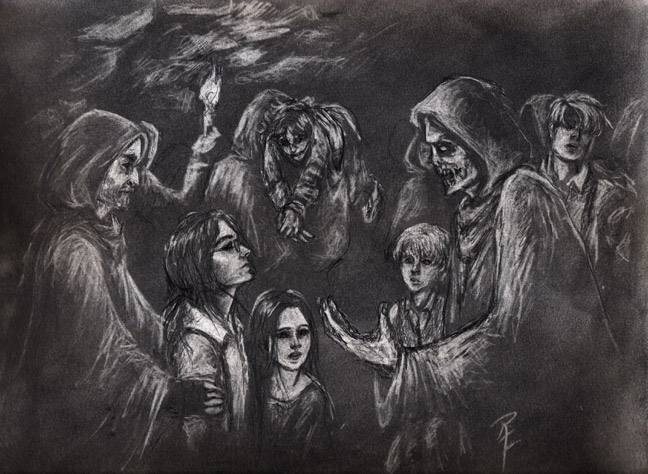 The man snorted.  There were shrieks from up ahead, around another corner.  Jon jumped.

“A blade came from nowhere,” a man cried.  “Both the men were felled.”

“Has the blade stopped?” the rotting man asked.

“Then move it, and send two more men on.”

“Felled,” Jon whispered, remembering something.  “Terrors await the unworthy.  The abyss will swallow all his enemies.  As the god warrior slew Elush-bel-azzer so shall those who enter here be felled.”

“What are the next ones, again?” Tam whispered.

“Plague and stones,” Jon whispered back.

Something squished under Jon’s foot.  He did not look down.  He closed his eyes.  Tam held him hard.  When there was yelling again Jon still did not open his eyes.

“That was unexpected,” the horrible voice grated.  “I thought the thieves would last longer.  Untie the little one.”

Jon’s eyes opened. He looked for the pickpocket girl.  She was being set down on the ground now.  Her eyes were bright.  It looked as though she might have been crying.  “No,” he said.

Two of the robed men grabbed Djaren, stopping him from plunging toward the rotting man.  It took three of them to restrain Tam.  Jon lost his brother’s hand, and grabbed at the loose tail of his shirt instead.  No one had grabbed him yet.  Anna, along with Ellea, had two robed figures standing guard over her.

The rotting man looked at the children in some surprise. “My.  You care about the life of a worthless child who robbed you.  Do you think I care?  Boy child, girl child, what are your kind to me, but ants upon the earth?”

The pick pocket spit out her gag, and snarled.

“Be careful!” Jon yelled to her.  “Rocks will fall on your head!”

A robed man grabbed Jon now too, and the pick pocket glared at him.

“The door said so,” Jon added, desperately.  The man who had a hard grip on both his shoulders was not rotting, but he didn’t smell good either.

“Are you ready to surpass your ill-fated colleagues?” The rotting man asked the pick pocket girl.

She gave him a challenging glance, sharp chin high.  “Try me.”

Jon admired her bravery, but wanted to scream.  He didn’t want to see anyone die.

Djaren looked equally upset.  Anna was crying.  Ellea was frowning, and if looks could have killed, the rotting man would have fallen down dead a hundred times by now.

The pickpocket grabbed a torch from one of the robed figures, and stalked off down the hallway.  She rounded a corner, and there was silence.  The light from her torch had stopped moving.  The men in robes waited.  Nothing happened. There was still no sign.

Kara crept along tight to one side of the passage way in the darkness, watching the ceiling closely.  She left the torch immediately, and her eyes adjusted quickly to the dark, as they always did.  She noted a stone in the passage that stood out higher than the others, and the old and crumbling beams overhead that supported loose stones.  Not subtle, she thought.  She wondered if Negal’s men had even seen the disasters coming.  She shivered, and hugged the side of the passage.  Just let them follow me.  I will make that walking corpse sorry. She crept carefully to a point past the dangerous looking ceiling, and crouched waiting in the shadows.  Robed men appeared at the end of the hall.  They had found her torch.  They advanced down the hallway.  Kara saw the rotted man and the robed men with the children still hanging behind.  The robed men moved closer.  Kara held her breath.  One of them stepped on the higher stone, and a large stretch of ceiling gave way.  There were curses, screams and cries.  Above it all, Kara heard the rotted man’s laughter.  “Well done, little thief.  Was that your revenge?  Shall I send in your playmates next?”