Chapter Seven–Thieves in the Night

Hellin looked in on Jon later after he and Tam had washed up and dressed.  She insisted on re-applying wet towels to Jon’s head and neck, and giving them both a salve for sunburn.  “You’ll soon be healthy and brown as Alarnans, but Shandorian skin takes a while to acclimate.”  She smiled.  “Put this cream on every morning and every night, and any time it starts to sting.  And wear your hats.  How are you feeling, Jon?”

Dinner proved to be a splendid and crowded affair, and not nearly so formal as Jon had imagined it would be.  Mama Darvin was nearly as good a cook as Jon’s own mother.  Mrs. Darvin, Anna, and Anna’s father Harl the quartermaster shared the same long table as the Blackfeathers and their guests.  There was a great deal of excited discussion about translations, and digging, and the best way to move a large door.  Harl, a big man with a heavy northern accent whose idea of dressing for dinner was wearing a clean shirt rolled up to the elbows, offered the help of his work teams that very evening.

“Let us study it where it is first,” the Professor said.  “We need to find out more about it, and how it is settled in the passage.”

“I want another look at that corridor too, before Anna scampers back into it,” Harl said.  “I want to make sure that passage is sound and won’t come tumbling down.  I’d like to shore up those walls with some planks.”

“And we might cover the area with tarps as well, so dust won’t cover what we’ve cleaned,” Anna said.

“The shade won’t hurt either,” Hellin said.  “And it’s my turn to admire the carvings.”

After a long, hot, but happy evening of brushing sand from carvings, grubbing for interesting bits of debris on the passage floor, and squinting over translations in a crowded corridor, Jon was all too happy to be able to collapse into his new bed.  Everyone had been able to take turns visiting the bathing tents.  Now Jon lay on soft quilts, clean, covered in sunburn salve, and happy.  He fell asleep quickly.

Jon was not sure what it was that woke him.  He found himself suddenly sitting up wide awake in bed, his heart pounding.  He heard a noise then, not close, but from somewhere outside, at a distance.  It was a grinding noise, followed by a thud.  In the next bed, Tam stirred.  Jon climbed quickly out of bed and grabbed his brother’s shoulder.

“Tam, Tam, there’s something out there!”

Tam rolled over and grunted.  He rubbed his eyes and struggled his way out of his sheets.  “Where?”

Jon pulled at Tam’s arm and dragged his sleepy brother toward the tent flap that led outside. He ducked under and pulled Tam after.  The moon was nearly invisible, just a tiny sliver in the sky, and it was quite dark.  Jon and Tam threaded their way quietly among the tents, out to the edge of the dig where Jon paused, shivering.  Tam frowned and rubbed his eyes again.  “The workmen don’t come out here to dig in the middle on the night.”  There was rustling somewhere below, and whispered voices.  Tam went down the rope ladder, keeping Jon behind him, and they carefully rounded a few corners.  When they came closer to the corridor with the carvings, Tam stopped, and Jon peered around him to see the quick glimmer of a hooded lantern and the shadowy shapes of robed figures.

“Oi!” Tam shouted, in the deepest voice he could muster. “What’s this?”

The figures jumped and scattered, running in all directions.  A somewhat familiar small shape rushed past Jon, pushing him hard out of the way with a bony elbow.

Sounds from the camp above told them that others were awake now.  Jon darted forward into the now empty carvings corridor and Tam ran in after him.  Someone had dropped the lantern, but it was still burning.  Jon lifted the shutter, held the lantern high, and looked about.  There were ropes, chisels, and footprints on the ground, and the big carved door had a blank missing segment.  Behind the missing tablet was only bare rock.  The thieves had stolen the translation stone. 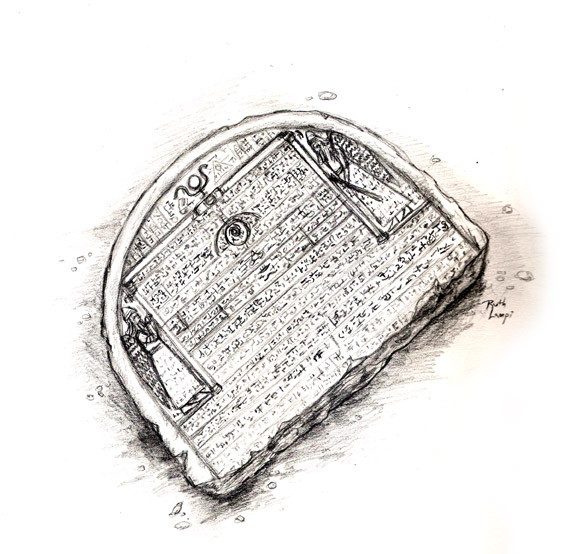 The children gathered in the sitting room wrapped in quilts while the adults had a quiet conversation down the hall in the Doctor’s study.

“I don’t understand, why would they take the stone?” Jon said.  He sat on the divan beside Tam, sipping tea that Mama Darvin had distributed to “calm the nerves”.

“It isn’t shiny,” Ellea agreed, from her spot amid floor pillows.

“But it would be priceless to a scholar,” Djaren said, his voice hushed, “or to a rival archeologist.  Father has made some enemies over the years.”  He wasn’t wearing his spectacles, and he looked a bit like his father.

“They would have to be close though, to know about what we found so quickly,” Anna pointed out.  She was wrapped in a dressing gown and a quilt, and had taken over Hellin’s armchair. 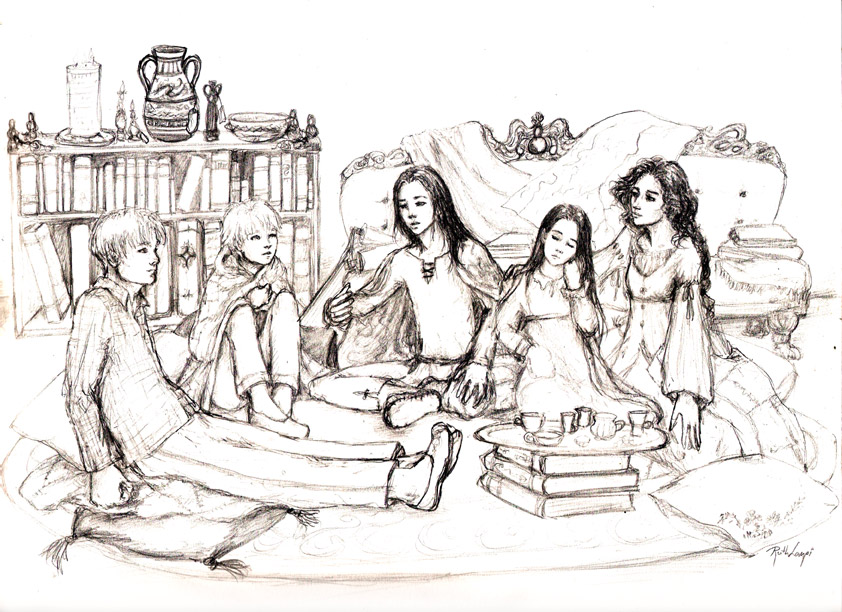 “But I have.  Sort of.”  Jon explained about the small figure who had pushed past him.

“What kind of thieves steal a satchel full of notes and then a translation stone?” Tam asked.

“They have to be working for some employer,” Djaren insisted.  “We should start looking for people who don’t belong in Alarna.  We should go into town and make inquiries.”

“If that pickpocket followed you all the way from the grand terminal, he certainly can’t belong here,” Anna said.

“We’re dealing with outsiders then,” Djaren agreed.  “If we identify them, maybe we can find out who they are working for.”

“I want some words with that little thief,” Tam said.

“He still has the Professor’s pocket watch,” Jon said. “Unless he’s sold it.”

“That could be hard, in Alarna,” Djaren said.  “Gems, gold and statues you can pawn here, through the so-called antiques dealers, but not pocket watches.”

“Djaren tried to pawn one he got for a birthday,” Ellea added.

Djaren glared at her.  “I think that someone was refused permission to dig here, and is trying to steal what we’ve found.  The Arienish and the Levour have asked for permission to excavate here and have been refused.  Remember last year at Mervoe, when that nobleman tried to bribe our workers?”

“I think,” Djaren said, “that one of father’s old enemies is back and trying to make trouble for us.”

“And with the stone lost, how will we ever translate the Sharnish?” Jon asked the most painful question.

Djaren looked sick.  “They stole our research.”  He reached up to adjust his spectacles and, not finding them, frowned.

“You’re forgetting,” Anna said, with a wicked smile, “that it’s not so lost as that.  I took photographs, remember, and the thieves didn’t get those.  The camera is under my bed, and safe.”

“Can we develop them at once?” Djaren leapt to his feet.

“No, I need more supplies from the village.  There’s a package coming for me by mule caravan up from Sheblas with more silver nitrate.  It might have arrived by tomorrow if we’re lucky.  With that I can set up my dark room and get started.”

Tam nodded.  “So we get your tools or whatnot in town and see if we can’t find some thieves to question.”

“Or some unscrupulous thieving archeologists skulking in the hotel,” Djaren said.  “Be on the look out for anyone too pale or too well dressed for this place.”

Jon considered Doctor Blackfeather’s appearance and decided that he certainly fit that description, but he didn’t say anything.  He was nervous and excited about what the next day would bring.

It was hard to fall back asleep that night, but at last Jon did, despite Tam’s snores.

One Response to Chapter Seven–Thieves in the Night