Tam leaned over to join Jon in peering out the compartment window at the gray, misty view outside.  The train gave out a loud hoot and one long slow lurch that sent the luggage sliding beneath the seats, and then it was still.  The mist outside parted to reveal a busy platform with bustling porters and passengers.

“Those are fine horses,” Tam observed, squinting out at the road beyond the station where bright carriages passed to and fro.  “Don’t know about those carriages though.  Gaudy.”

One gilt carriage stopped to let out an especially gaudy set of foreigners in fine clothing.  Porters scrambled to carry a great array of boxes and trunks from the carriage to the train.  One porter dropped the end of an enormous trunk and a foreign man in a top hat waved a cane and shouted at him.

“You don’t think Professor Sheridan is with them, do you?” Jon asked, suddenly a little nervous.

“Nah.”  Tam rubbed at his nose.  “The professor’s a good honest Shandorian, right, like us.  We’ve no use for gilt carriages.”

“I think we should get out and have a look round.  I want a paper.  I bet they have papers here.  New ones, from today even.”  Jon peered about, looking for shops, or the boys who had gone around waving papers at the last stop.

Tam, sandy haired and big framed, leaned back in his seat and frowned.  “That’s nonsense.  It’s best we stay right here where the Professor can find us.  I won’t be losing you in that crowd.”  Tam caught his brother’s disappointed look.  “And who’s to say you could read the papers here?  They might be foreign.”

“We’re in Vellinos.  They’re bound to speak trade common here.  We’re just south of Arien.  They might get the Arienish National Times.”

“You’ve got one of those in your case already,” Tam pointed out.

Tam shrugged.  Tam could read, he just didn’t care to, not like Jon did.  A puff of steam outside obscured the view from the window and showed Jon his own reflection briefly in the glass.  A thin boy with large blue eyes looked back at him, his blond hair cut neatly short, his best clothes rumpled from several days’ travel.  He was not wearing the cravat his mother had carefully tied onto him.  Jon looked about for the thing.  Should he be wearing it to meet the Professor?  The Professor was famous, after all, and Mother had wanted Jon to make a good impression.  His essay had certainly made enough of an impression to win him this great opportunity: a summer working with Professor Eabrey Sheridan at the archeological dig site in Alarna, along with the equally famous and even more mysterious Doctor Corin Blackfeather.  Jon found the cravat wedged between two seat cushions and pulled it free to find it was a wrinkled mess.

The window was clear again and Tam was looking outside now, with the familiar dubious expression that said he wasn’t comfortable in strange and foreign parts.  Tam was here to look after Jon, and for no other reason.  At nine, even a very mature and intelligent nine, Jon Gardner was not permitted to travel alone, but with thirteen-year-old Tam along, big for his age and steady, Mother trusted they would get safely to the Professor’s watchful eye.  She had left Tam with all kinds of instructions, and he was taking them quite seriously.

“I don’t like the look of that fellow,” Tam muttered, frowning at the crowd of folk now boarding the train.  Jon looked, but saw no one especially suspicious.

“Too pale,” Tam explained.  “Like he’s never seen the sun or plowed a field.  The man behind him is as dark as honest dirt.  He seems all right.  He didn’t object when the rude, pale fellow butted in line.”

“Don’t see nothing noble about him,” Tam said.  “He needs some sun.  And he’s wearing gloves.  What kind of man wears little white gloves?”

“It must be a fashion,” Jon said.  The Shandorian fashion for men consisted of a sturdy work shirt, breeches, suspenders, and a vest and jacket.  Jon’s jacket, folded in the corner for a pillow, was grayish blue.  Tam’s, slung over an open valise, was brown.  Mother had let Tam’s coat out recently to make more space in the shoulders.  The new cloth was a little darker than the old.

“Is that the Professor, do you think?”  Tam pointed out an elderly fellow with enormous whiskers in a trim dark coat.  Jon looked him over, but wasn’t sure.

“Maybe that fellow.”  The next man was dark skinned, in a big coat, and carrying a large valise.  “Him, maybe?”  Tam pointed out another man with a beard, but he moved a step to reveal a family in company with him, noisily boarding the train.

“Pardon me,” a soft adult voice spoke from the door behind them.  “But am I correct in assuming that you are Tam and Jon Gardner?” 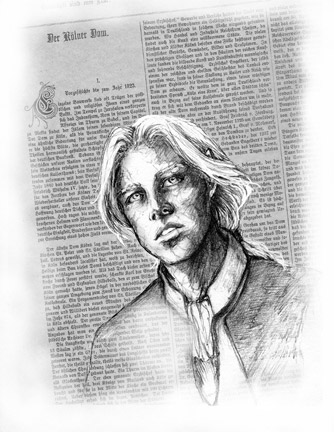 The boys turned to find a young man at the door of their compartment, looking in. He was an adult, but not much taller than Tam, and carrying only a single worn satchel. He had calm eyes, an awkward smile, and long blond hair pulled back in a tail. His clothes were somewhat old fashioned and showed signs of wear at the cuffs and hem. He wore tall leather travel boots, like the northern clans in Shandor did, but also a hat of an Arienish fashion. Most peculiar of all, the man’s young face, and his hands and neck as well, were webbed over with a faint tracery of old scars. Jon wondered what had happened to him. Without the scars, the man would have been considered handsome. The man smiled at them, a little nervously, and took off his hat. “I’m Eabrey Sheridan. That is, Professor Sheridan, if you like. You are the Gardners?”

“We are, sir, and it’s good to see you, sir.” Tam rose and shook the Professor’s hand heartily. Jon shook the scarred hand next, suddenly speechless in the presence of the man who had been his idol for some years. Jon was very surprised to find the Professor so young. For a man with five doctorates, who had written over nine volumes and hundreds of essays, he was not at all what Jon had expected.

The Professor seated himself on the cushions Tam hurriedly cleared of stray luggage, and Jon continued to stare at the famous scholar, unable to help himself. The Professor’s ears, revealed now that his hat was at his side, were a curious shape, like leaves, and came up through his long hair. There was scarring there too, but like the rest, old. Jon tried to ignore all the spidery light lines of scars and focus on the man’s blue eyes. “It’s an honor to finally meet you, sir,” he said. “I’ve read all your books.”

The Professor raised his eyebrows and smiled again, mildly. “I hope they didn’t bore you. My students tell me I have a long winded and old-fashioned way of rambling when I get too involved in a topic.”

“I liked your books, sir. I especially liked what you had to say about the inscriptions discovered under the castle in Shandor, and your translations of the Ancients’ text there. I believe you are right in thinking that the wing rune describes an entity rather than an action.”

The Professor looked surprised and pleased. “I look forward to hearing what you think of the text found in the ruins at Alarna then. I’m eager to see it myself.”

“He is waiting for us, and for some papers I’ve brought with me,” the Professor said, gesturing toward his satchel. “I have been studying the legends and the history of the site to try and get some idea of what we might find at the dig. Most scholars agree that Alarna was once the center of a great civilization. They used bronze weapons and had superior skills in masonry, which they used to build great cities and temples. Certain texts mention that Alarna was ruled by an immortal god-king who conquered many neighboring lands. He was a harsh, cruel ruler who demanded many sacrifices. One day a great warrior from an unknown land slew him and brought his temple crashing to destruction with all his wealth and glory in it.”

“So we might be digging for buried treasure?” Tam asked.

“Likely not.” The Professor smiled apologetically. “The tomb robbers of Alarna are famous for their exploits. Any treasure will be long gone, but we hope to find clues to what really happened between the warrior and the god-king. If we can discern the events of that encounter, it may have some bearing on other, er, historical encounters with which Doctor Blackfeather and I are concerned. In studying.” The Professor brushed some unseen dust from his worn trouser knees, looked up, and smiled at Jon. “What I find most fascinating is that Doctor Blackfeather’s expedition has found writing of the Ancients on a tablet at the Alarna site.”

The Ancients, Jon knew, had lived in Shandor long ago. They were the people who built the foundations of the castle and had left artifacts, stories, and traces of their bloodlines and culture to Shandor’s people.

“As you likely know,” the Professor said, “it is rare indeed to find their written language anywhere outside of Shandor.”

Jon smiled at his brother’s bewildered look, and then at the peculiar Professor Sheridan. It was wonderful to finally meet someone who could speak the same language of old civilizations, ruins, and stories. Tam was a good brother, but his interests were all in horses, farming, and the soil of Shandor: not for its history but for its everyday present. “Professor Sheridan, can you tell us more about the ruins at Alarna? Is it true there are underground rivers, and that they found a gallery of tombs with the people encased all in painted clay?”

Tam was asleep before an hour had passed. The conversation paused only long enough for the three to have dinner from the supper cart, hours later.

“How long will it be until we reach Alarna?” Tam asked that evening.

“Two days,” the Professor replied. “Tomorrow we switch trains at the grand terminal in Merigvon and take the southern line down overnight to an outpost station in Alarna. We’ll travel by carriage from there, out to the dig.”

Tam sighed. “We’ve already been on the train four days. I didn’t know you could be so far from home. How many days would it take to walk back, do you think?”

Jon thought. “Over a year, probably, unless you had wings.”