Kara stayed for dinner and resisted the temptation to pocket any more of the interesting trinkets that passed before her.  She refrained from commenting that the food was too bland, and she didn’t stare at the scar-faced man’s scars or at the winged freak’s lack of wings.  She even remembered to use the wooden tableware instead of her fingers.  Being polite was much more difficult than she’d anticipated.

After dinner it was quite late, and Kara was determined not to lose any more time, in case the lady realized just how much silver was in the bag of coins she’d handed over.

She crept to the door unnoticed, and was about to slip out, when Jon saw her and dashed after her.  “Are you going?” he asked.  She considered pointing out to him what a stupid question that was, but he stood blinking up at her with his huge blue eyes as if she were someone he respected to a painful degree.  The scar-faced Professor had followed him and was looking at her too.

“Take care of yourself, half-size,” she told Jon.  “Hey, um, you with the scars.  What does your watch say?”

The Professor looked at her, surprised.  “Oh.  Um, it’s an inscription, from an old friend.”  He opened the recovered watch and held it out.

“Just what it says,” the Professor said, softly.

“Which are you, then, mortal or immortal?” Kara said mockingly.

The Professor said nothing, just brushed his hair behind one of his odd ears self-consciously, with a glance at the floor.  “I don’t know.”

Kara was suddenly sorry she’d asked.  “Well, you’re all freaks together.  Good for you.  I’m leaving.”

“And you’re the strangest of them.” Kara said, mussing his hair.  “Don’t ever cross my path again.”

She left without looking back.  She walked through the dark, swearing when the moon disappeared behind cloud, but able to see, regardless.  As it got chillier she pulled her coat closer about her.  She had only trudged a few miles toward town when the sound of a carriage caught up with her.

“Momma thinks we’re asleep,” came Ellea’s whisper. “So hurry and get in, and don’t argue.”

Kara considered arguing anyway, but was too tired to think of anything particularly stinging, and so with a single curse pulled herself up onto the carriage.

She climbed to the top to find Djaren in the driver’s place and Ellea making room for her beside them.

“We couldn’t let you go without saying goodbye,” Djaren said.  “And we do need to talk.” 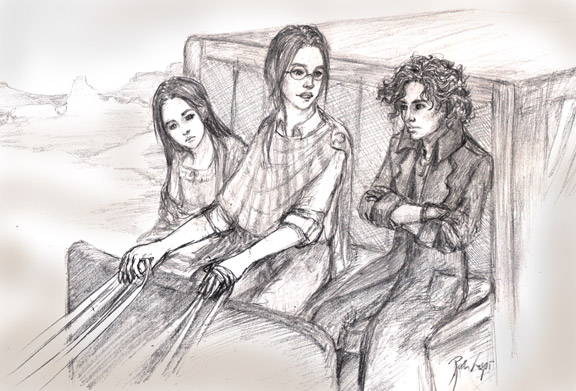 “What about?” Kara frowned.

“You’re unkillable by whatever that thing was, you can see in the dark as well as Ellea and I, and can break locks by kicking them,” Djaren said.

“And you see Poppa,” Ellea added.  “And I can hear you clear as talking when you think too loud.”

“And a monster who is after us is also after you,” Djaren said, before Kara could interrupt.  “You’re a freak just like us.  I won’t ask any questions, but I say we make an alliance.  We’re going to be in Germhacht next May, to go ask the consul for permission to dig in Narmos.”

“There’s supposed to be a temple there that’s over three millennia old,” Ellea said.

“It will be great fun.  You should come.”

“Will there be another attack by supernatural horrors?” Kara asked sarcastically.

“Only if we’re lucky,” Djaren grinned at her.  “Promise you’ll come.”

“Then be our arch-enemy.  Just come.”

“You are an insane boy, and I should have broken your face and spectacles long ago now.”

“Good-bye.” Kara hopped off the carriage as it passed the first of the farms outside the village, and took to her heels, with Djaren’s silver spectacle case tucked carefully in her breast pocket.  It had a star on it.

Jon found the rest of the summer to be glorious if uneventful.  Professor Sheridan had been nauseated, Hellin told them, seeing the mess in the passage, and even sicker at the sight of all the smashed artifacts in the burial chamber.  Once he settled down to cataloguing and documenting, however, he was much happier.  Djaren and Jon helped with translations and Anna with sketches and photographs, and work progressed quickly at the site.  One day, not long before the end of Tam and Jon’s time in Alarna, it came time to open the clay sarcophagus and see how the Ancients and the Sharnish peoples had buried the warrior.  They stood gathered about the sarcophagus in hushed silence, as Harl and Doctor Blackfeather carefully lifted the lid.  Anna held up a lantern to reveal the inside.  Funeral wrappings lay bundled in an otherwise empty case. There was no sign at all of the warrior.

“I thought not,” Doctor Blackfeather said softly.  “He joined the Ascendant.”

The Professor spoke a blessing and touched the grave clothes.  They crumbled under his light touch.

“They haven’t been here for well over two thousand years, Eabrey,” Doctor Blackfeather said, going to his side.  The Professor looked pained.  “I know,” he whispered.  “I just hoped that perhaps they had left a sign.  Something.”

“They did,” Jon said, lifting his hand.  The Professor took the offered hand and stood, looking again at the silvery emblem.

“And they passed it to you,” the Professor said, with a sad smile.

“What kind of sign are you looking for?” Jon asked, watching the Professor’s blue eyes intently.

The Times came the next day, as they sat waiting for the train that would take the Gardner brothers home.  The children sat gathered round Anna as she finished the serialized story aloud.

Djaren held out his hand and Tam grudgingly set a coin in it.  “Three more faints.  I was right.” Djaren grinned.  “And she didn’t die, Ellea.”

Anna made a face at them.  “She accepted Lord Ellerton’s proposal of marriage, and fell into his arms.  They’re going to live happily ever after.”

“Until she dies in three months,” Ellea said.

“Maybe she doesn’t.  Maybe now she’s done falling in and out of love with people and caring for her mad aunt and ailing father, she’ll steady out a bit and not feel the need to pitch over so often,” Tam said soothingly.

“There’ll be a new story next month,” Djaren said.  “And a new dig next spring.”

“Hmm,” Hellin said.  “Narmos isn’t somewhere either I or your mother want you reading too much about.  Corin and Eabrey will be overseeing most of the digging, and we’ll be camped a bit further off.”

“History is never entirely safe, love.  You’re old enough to know that.  In history we find ourselves, the demons we have overcome, and the things that make us as we are.”

“I thought history was mostly meant to be boring,” Tam said.

“Where’s Doctor Blackfeather?” Tam asked, looking around.  “I thought he said he might be traveling with us.”

Jon watched with a breathless smile as a winged form alighted on the top of the moving train, cloak and wings billowing in the hot wind.  “He will be.”

Hellin put a hamper of sandwiches into Jon’s hands and smiled at him.  “You’ll be safe all the way back home.”

“I’ll be going along as well,” the Professor smiled.  “I’ve got a book or two waiting for me at Merigvon.”

“And next summer, we’ll be camped near the city of the Invincible Kings, whose power allegedly came to them from the elder gods of Narmos.  They were said to smite down their enemies with lightning and plagues, until the entire civilization was destroyed by natural disasters.  Only a few escaped its ruin and fled clear across the world, bringing their story with them.”

“And you will not be digging at Narmos,” Hellin said.  “Your father will.”

Djaren grinned at Jon and Tam. “We’re going to have an exciting time.  We’ll see you next spring.”

“This might come in handy,” Ellea said, taking Jon’s hand in her own, and lifting it to see the sparkle of silver again.

The Professor guided them up the steps and Tam carried the luggage.  Jon paused to look back at Anna and the waving Blackfeathers and grinned.  “Thank you.  For everything.”

“Aye, it’s lovely you have a treasure of the Ancients,” Tam grumbled, pulling the cases up the steps, “But what’s Mum going to say?” 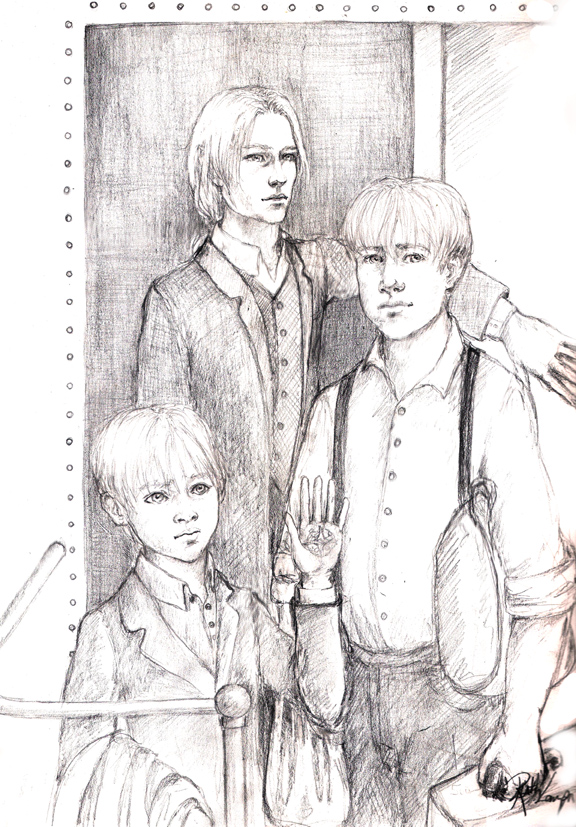