Kara crept silently along a marble hallway, laden with a very full bag. The gilded cabinet had contained more than she’d imagined—folders of papers, and lots of small, breakable objects. Kara suspected the lady didn’t want the fragile things broken, so she’d had to waste precious time wrapping them in the papers. The bag was so big she had to drag it. Happily, the floor was smooth marble and the bag slid easily and quietly along. She would deal with the stairs later.

She peered around the next corner and froze in place, seeing lamplight in the rotunda ahead. Who would be here still reading at the dinner hour? Kara left her bag and crept forward to scout. Oh. Him.

Djaren Blackfeather sat at a table in the center of the room, in a circle of lamplight and books. He’d arranged the stacks of papers and volumes like towers around the table, pen pots serving as spires and ink wells as minarets. His too-pretty face was intent over whatever he was reading, and his long white fingers flipped through the pages of an adjacent volume. As always, Kara felt immediately annoyed with him. One, he was in her way, two, he was effortlessly reading any of eight languages that Kara couldn’t spell a word of, and three . . . three, he was Djaren Blackfeather. And then he looked up, into the dark shadows where she was standing, and his expression transformed into a look of joy. “Kara! You came! I knew you would.” 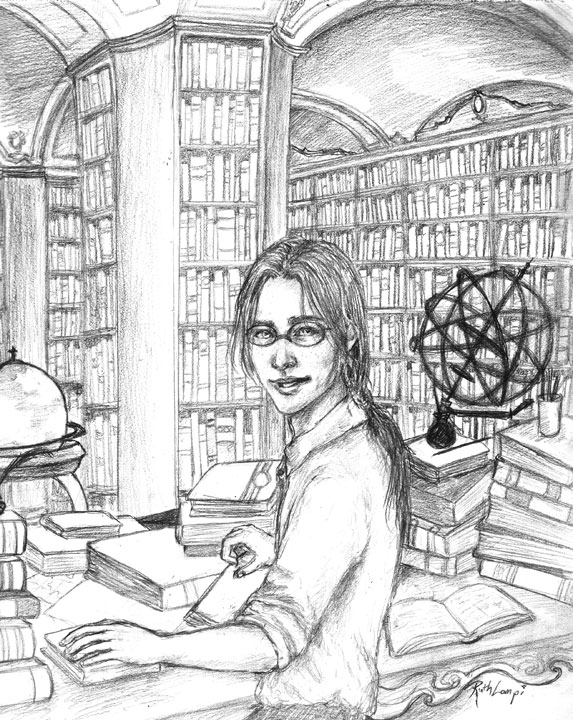 Kara tried to swear, but found nothing to say that fit the situation without being horribly awkward.

Djaren’s expression turned puzzled.  “I wasn’t expecting to see you in the library.”

“What’s that supposed to mean?”  Kara left the heavy bag out of sight and stepped forward.

“I’m sorry, that was stupid.  I’ve been putting my boots in my mouth all day.” Djaren looked pained.  He stood, dropping a volume on the floor.  “What I should have said is that I’m very happy to see you here.”

Kara didn’t answer.  She stared at the book he’d dropped.  “What’s that?”

Glaring up at her from an open page at Djaren’s feet was a sketch of the artifact she had recently thrown into a sewer.  Djaren blinked and looked down.  “Oh, that’s the seal of Kesh.”  He bent and retrieved the book, holding it out to her.  “Legend has it that it binds the powers of a demon god who once smote the earth.”

Kara took a step away from the book, more grateful than ever that she had thrown the thing out.

“It’s important that it doesn’t fall into the wrong hands,” Djaren informed her. “We’re researching what to do if it should wake.”

Djaren grinned at her.  “I wish.  We can’t get into Narmos at all, much less under it.  So we’re all quite bored and safe.  You should come by the hotel.  The others would love to see you.”

Food sounded wonderful, but Djaren was a walking door to nameless calamities and Kara had a sack of stolen archeology to deliver.

She tried to think of a way to put him down coldly, but couldn’t come up with anything very clever.  “I’ve got a place to be,” she fumbled.

Djaren gave her a questioning look.

Kara glared at him. “I’m not here to play with you and your little friends.  Unlike you, I have a life.  Enjoy your books.”  She spun on her heel before Djaren could say anything, gathered her sack from behind the pillar and dragged it off toward a back exit.

On her way out the conservatory doors, Kara glimpsed a man’s face through one of the library windows.  It had a hooked nose and face powder, and was looking right at her.  Kara swore and ducked out of sight under the rose bushes.  By the time she managed to retreat into the maze of houses and alleys she was breathless, scratched, and in a foul mood.

Ellea dropped the Pumphrey book onto the sitting room table, where the family was gathering to go down to dinner.  “Book of rubbish for you, Mother, from the lady with too much perfume.”

Mother looked at the thing, and sighed.  “I’m so sorry, dears.”

“I want a cake.  Anna said I could have the lemon ones.”

“Very well,” Mother relented.  “One.  As long as you can eat your dinner after.”

Jon poked at the Pumphrey book with a finger.  His hand was no longer glowing.  “The book smells of perfume.”

“Come have a cake as well, Jon, or some tea,” Mother invited, pulling back a chair.

Jon’s gaze moved to the door, where Djaren was just entering with a large stack of books in his arms.

“Hullo, all.  I brought these back for you, Jon.”  Djaren grinned around the books.  “I’m sorry to have been so long.  I got all caught up in trying to find the useful volumes.”

Jon’s face lit up. “Hurrah!  Now we can research.”

Mother laughed.  “I won’t stop you, but again I will insist you eat dinner first.  No matter how fascinating your research.  And, dears,” Mother’s face grew serious.  “If you are going to be reading about Narmos, you really oughtn’t read just before bed.”

“She thinks the bits about plagues, human sacrifices, and the depredations unleashed by demon gods will give us nightmares,” Djaren told Jon.

“Where are Anna and Tam?” Djaren asked.

“I’m right here,” Anna said, entering the room.  “Before the discussion of depredations, I distinctly heard something about tea.  And Tam is visiting the stables to see about a coach.”

“I gather he’s just seeing if there is a coach in the stables.”

“There is,” Tam said, from the door.  “A right gaudy one.  They’ve some fine horses, though.  Well looked after.”  Tam stopped on the mat and stared down at his boots, which had acquired deposits of muck from the stables.

“Thank you, Tam, I’ll fetch you shoes.”  Anna grinned and slipped out.

“Would you like some tea as well?” Mother asked Tam.

“I would.”  Uncle Eabrey came in from his room, and looked down at the Pumphrey book.  “What is this?  And what is that smell?”

“It’s either Tam’s boots, or the gospel of the Pumphrites.”  Mother sighed.  “Having failed to storm the citadel, they are attempting to convert the children.”

Uncle Eabrey picked up the book and flipped through it.

“The smell is certainly the book,” the Professor said.

“Don’t you worry, dear,” Mother told Tam. “We’ll get you gum boots. The most useful things Pumphrey’s ever been behind.”

Dinner consisted of sausages, gravy, noodles, and potatoes, along with a smelly cabbage dish that Tam liked and Ellea didn’t.  Having been reprimanded for reading at the table, Djaren began making little buildings with his potatoes.  “At the temple at Narmos, there is a ziggurat on a terrace, like so, and no one but the high priests were allowed to ascend to the top.”  Djaren placed a precarious piece of sausage atop his potato ziggurat.

“You had better eat your civilization before it topples, dear,” Mother advised. 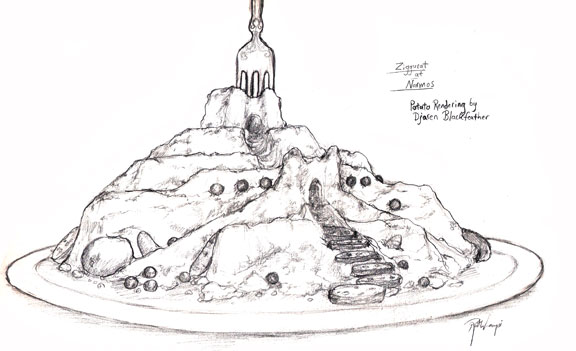 “This is why no one lets you lecture on archeology,” Anna observed, as Djaren’s potato ziggurat slumped.

“Not really,” Anna said.  “The lecture is off.  Evidently they’ve had awful trouble with thieves.”

Anna frowned at him.  “Some thief stole their artifacts since they arrived here.  It’s terrible for them.”

“Ten to one that explains everything,” Tam said. “She was on the train too.”

“The guards were looking for a thief.” Jon glanced about the table.  “You don’t think–?”

“May I remind you that no lecture means no information on what the Chauncellors have been up to in Narmos,” Anna said.  “You’re just very lucky that I’ll be able to ask Varden all about it myself tomorrow.”

“What?”  Djaren dropped a forkful of potato ziggurat.

“He’s taking me to the Berdrach collection.”

“That’s out of the question. Why would you want to go anywhere with that–” Djaren began.

“I don’t think it’s a good idea for you to be going off alone with him,” Tam said.

Anna pointedly ignored Djaren and addressed Tam.  “But I won’t be alone.  You’ll be there all the time guarding me.”

Tam opened his mouth and shut it, evidently unsure whether to be annoyed or flattered.

“If you can spend all afternoon with a thief, there’s no reason at all I shouldn’t have a day at a gallery with a gentleman,” Anna said acidly.

“She has the high ground, dear.”  Mother patted Djaren’s hand.  “Now eat your dinner.  I am sure Anna will be careful and intelligent in all her decisions.”  Mother gave Anna a long look, which Anna met.

“Tam will go with you only if he doesn’t mind, and you will behave like a perfect lady.”

“Where did you see Kara, Djaren?”

“Whatever was she doing there?”

Mother sighed.  “Eabrey, must you read at the table?”

“Sorry, Hellin.” Uncle Eabrey hurriedly set down the Pumphrey book.  “But this is the most amazingly dangerous rubbish.”

“It romanticizes the idea of possession terribly.”

“Not that kind of possession.  He means like when an evil bodiless entity takes hold of a mortal human and makes him a helpless slave to its destructive will,” Djaren said amiably.

“How do you romanti-whatever that?” Tam looked horrified.

“—who just want to borrow ones body for the greater good,” Djaren finished.

“A mortal usually cannot be possessed without having first consented to the possession,” Uncle Eabrey said.  “Unless one surrenders one’s mind in pride, despair, or even,” he glanced at Djaren, “in curiosity, no entity can take hold. This rubbish suggests that all ‘enlightened souls’ should surrender their wills and good sense to whatever ‘the spirits’ will for them.”

“So, in time, a bunch of perfumed fools might be controlled by evil entities?” Tam asked.

“I suppose that’s up to the entities.”

“If I were a powerful bodiless evil,” Ellea reflected, “I shouldn’t choose any of Pumphrey’s people.  I think he’s a just a fool.  The most sinister thing about the man is his silly moustache.”

“Aren’t there any good entities?” Anna asked Mother, curious.  “Isn’t there always something, to balance?”

“The good weren’t the ones rendered bodiless in the war before the breaking of the world,” Uncle Eabrey said softly.  He tapped the cover of the Pumphrey book.  “Or so the writings of the Ancients suggest.”

“So, to use the Sarvarthi terms, there is evidence of demons, but not of angels?” Djaren asked.

Ellea considered her memories of Father’s wide black wings, his beautiful serene features, and the sword of flame he carried.

Mother caught something of her thought, and smiled.  “There is evidence of evil leveling cities and civilizations.  Good tends to be, I believe, a bit more . . . subtle.  It doesn’t mean it’s not there, merely that it chooses not to interfere with the free will of people.”

“But that’s what Pumphrey is telling people to do.  Give over their wills.  We have to stop him, don’t we?”  Djaren looked to Mother.

Mother frowned, speculatively.  “Well, we all know that not everything that whispers in the ear or lurks in ancient tombs is friendly and polite.  The question is, does Pumphrey?”

“I don’t think he has the sense to pour water out of one his own gumboots even by examining the patent on the heel,” Ellea muttered under her breath.

“He may be worth investigating,” Uncle Eabrey said.  “We should at least discern whether his intent is benign, or malicious.  Whatever his intentions, the books he’s publishing are as potentially devastating in their consequences as anything written by Doctor Ash.”

“And that is a name I absolutely forbid at dinner,” Mother said.  “No more talk of evils until after dessert, please, dears.”

This entry was posted in The Germhacht Episode and tagged chapters. Bookmark the permalink.