The Professor and his charges boarded their new train without further incident.  It was bigger than the last train, painted green, with brown upholstered bench seats in little walled compartments. A hallway beside the compartments ran the length of the passenger cars, of which there were sixteen.  The eight luggage cars and six freight cars were all off limits to passengers.  There were also three dining cars, two for the more well off passengers and one for everyone else.

The boys had explored all they were allowed of the train in a very short time, found the nearest lavatory, and chosen how they wanted to sit in their own car.  The Professor remained remarkably calm about the loss of his watch and satchel.  Jon wanted to ask him about the feather, but felt it was impolite to do so.  The Professor was being so very kind to them.  Unlike other grown ups, it didn’t matter to him who read what paper first, and so both boys were invited to share freely in the wealth of words before them.

Tam was at first reluctant to touch the things, but in a little while he found a story serialized in the Arienish National Times, of which there were three issues collected.  He began to work his way through it slowly, mumbling half aloud to himself in sections.

Jon was delighted to find that seven of the papers were in trade common, and of the rest, two were in Levour, which he could read fairly well, having learned it in the last year.  Two more were in Germhacht, another language he could read passably.  The Professor read from some paper in a queer alphabet that he explained was Corestemarian.

At length Tam reached the end of the Times without reaching the end of the story, and snorted with disappointment.  “It was a ridiculous story anyway,” he said.  “The lady kept having fainting fits at the least thing, and all the folk used too many words to say what they meant.  If people really went on like that it would be a crazy sort of world.”

Jon grinned behind his paper.  He had found a fascinating piece about some archeologist’s finds in the southern continent that contented him for some time until at length even he got restless.  Later in the afternoon he took a stroll up and down the hallway, and a made a game of keeping his balance as the train lurched through some dry and rocky countryside.  He was trying to follow a track of winding red in the carpet when another passenger pushed him rudely out of the way without a word of excuse.

Jon looked up indignantly to find that the passenger who had jostled him aside was none other than the ragged pickpocket who had stolen the Professor’s watch.  He stared at the boy who was, once closely regarded, thin, sharp featured, and foreign, with dirty dark skin and ragged curls of dark hair tumbling down untrimmed about ears and neck.  He wore a man’s coat, overlarge on skinny shoulders, and had a hole in the knee of his trousers.

“You!” Jon exclaimed.  “You stole from the Professor!”

The boy looked back at him and made a hand gesture that Jon was unfamiliar with.

“Give it back please.  The Professor is a good man.”

The boy gave him an incredulous look.  “Well, you’re hopeful, aren’t you?” he said at last, dryly, with an accent Jon could not place.

“Please,” Jon tried again, stepping around in front of the boy.  “I’m Jon.”

“How nice for you.”  The boy, little taller than Jon, easily pushed him out of the way.  “Now run along and play.”  The boy gave Jon a shove that set him off balance, and breezed down the hall to the last doors leading toward the freight cars.

“You aren’t allowed to go down there!” Jon said.

The boy gave him a cool glance back over his shoulder.  “And yet,” he said with a wave, and opened the door.  There was a sudden rush of fresh air from outside, and the boy swung himself out between the cars and began nimbly to climb up the ladder to the top of the train.  Jon stared in mingled horror and awe.  He wondered if he ought to go after the boy, or go tell the Professor what had happened.  He was still standing in the hall, looking at the open door, when the late light streaming in at the train window was obscured by a large dark shape.  Jon looked to his right, out the window, to find it covered by a huge jet-colored wing.  There was a rattling from above and down the ladder shot the pickpocket, looking pale under his layer of dirt.  The boy dashed past Jon with amazing speed, and light poured in as the wing lifted again.

“Wait!  Jon called.  “Did you see him too?”  There was no answer.  The pickpocket slammed his way through the first door and on to the next, down the line of passenger cars, impossible to catch.

There were no more glimpses of either thieves or black wings that afternoon, though Jon searched hopefully through the passenger cars.  He came back at last to the compartment where Tam and the Professor were now sleeping.  Jon tried to take up a paper, but found himself unable to concentrate on it. 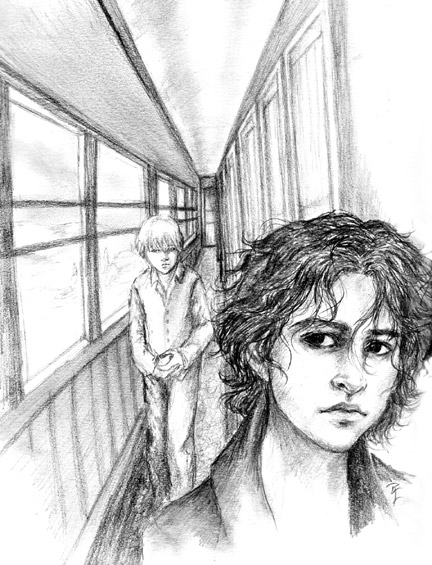 Kara swore silently to herself as she crawled between two tall, precarious stacks of luggage and maneuvered her way on hands and knees around first a crate and then a steam trunk.

It’s too big to follow me here.  I can go places it can’t.  If I hide it won’t find me, she told herself.  It wasn’t fair, but Kara was used to that.  Whatever she did, wherever she fled, the dark and the strange followed her.  It didn’t matter if she hopped a train to the far ends of the earth, the terror always followed.  Things began to happen.  Things went wrong, as things always went wrong, and she had to run again.

This time it was something new, a thing she had never seen before and wished now she’d never seen at all.  She shivered and made herself as small as possible to squeeze between two packing cases.  She grazed her knee against one sharp corner of a crate and further tore the fabric of her already ragged breeches.  She bit back curses and a cry as blood, thick and dark, rose in the shallow wound.  Stupid, stupid, she told herself.

Pulling herself out around a steamer trunk, at last she found a place to curl, in the middle of a full luggage car, in a cave formed of other people’s things, hidden from view.  With a few expert blows from her boot heel she broke the lock on a large trunk and pried it open, careful of the other boxes and cases piled high atop it.  Inside she found clothes, and better, a soft fur coat in which to burrow.

She climbed into the trunk and set about raiding it and making a sanctuary for herself.  She found a man’s razor, which she pocketed for a ready weapon; a pair of breeches that were too large for her, which she pulled on right over her own and tied with a black cravat; and a pearl bracelet, carelessly tossed in a pocket of a ladies’ coat.  She took the bracelet but discarded the lacy pink coat with disgust.

She pulled out the pocket watch she’d nabbed off the weak scar-faced man, the one Alehd had told her to distract while he went after the real prize.  Alehd was supposed to have met her on the train.  He never appeared at the meeting point.  Kara tried not to think of that.  It wasn’t as if she liked Alehd anyway.  She examined the watch, opened it.  There was an inscription carved inside the cover.  Kara didn’t know the language, but then Kara didn’t read at all.  She sniffed, and put it back in her pocket.

Return it.  What an absurd concept.  I stole it fairly and it’s mine.  What a very dull little boy. Kara patted the pocket with the watch and the one with the pearl bracelet and felt a little comforted.  Even if Alehd did not make it, and so could not pay her, she would have something to start over on.   The only thing she lacked here was food, and she wasn’t about to go venture out to the kitchen cars with a giant great thing waiting for her in her favorite spot on top of the train.  She curled into the fur and tugged the steamer trunk shut about her hiding place.  Better to stay hidden and safe and hungry.