Chapter Two–A Daring Theft and a Most Mysterious Apparition 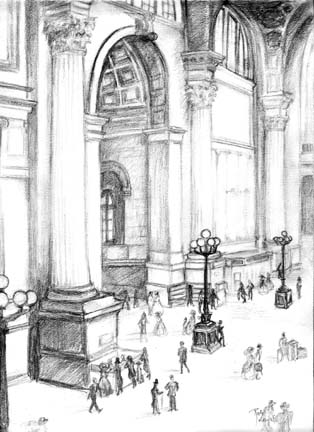 The grand terminal at Merigvon could be seen from some distance, gleaming amid the city’s spires. The great glass roof seemed to slide arching over them like a glittering clamshell as the train pulled slowly in. Other trains passed quite close to them, alarming Jon until he remembered they were all on their own tracks and couldn’t possibly collide. Dozens of tracks led into the cathedral-like building, and trains of all kinds stood puffing and steaming under vaulted arches of steel, stone, and glass. Statues stared down grimly from the high ornamented arches and balustrades on either side of the hall. Cherubs, soldiers, and ladies in flowing robes with scrolls and baskets of fruit were everywhere upon the high walls. Stone wreaths and angels, memorials of some foreign war, stood at the east end of the hall, winding around the largest clock Jon had ever seen in his life. The Gardner boys regarded the place with wonder, faces pressed close to the window.

“This is the crossroads of the continent,” Professor Sheridan informed them, straightening his hat carefully. “We will change trains here, and be able to stretch our legs.”

“Do they have papers?” Jon asked, hearing his own voice rather smaller and more breathless than he wanted.

“Quite a few. I telegraphed ahead to have certain titles bundled and ready for my arrival. We shall have a pile of reading for the next leg of our journey.”

Tam insisted on carrying both cases of luggage—Jon’s, heavy with books and papers, and his own lighter case with the broken handle that had to be held just so. Professor Sheridan, as before, carried only his satchel.

As they stepped down off the train Professor Sheridan checked his pocket watch against the large clock on the eastern wall and satisfied himself that it was correct. He slipped the watch back into a frayed pocket of his waistcoat. “Come along. Let us see if we can brave the crowd and find some tea before our train comes in.”

Tam followed after the Professor, lugging both cases, and Jon tried as best he could to keep up, despite the crowd pressing all round. He heard Tam mutter something about more people than he’d ever seen, but then his brother’s voice was lost in the howl of steam from a train pulling out. A man in a heavy fur pushed Jon sideways out of his way, and out of sight of Tam and the Professor. Jon had a frightening moment trying to find them again while caught behind a large procession of porters pulling along big carts of luggage. He was shoved first to one side then another, but found himself at last pushed along to an archway where a very panicked looking Tam and the calmer Professor were waiting for him.

“You hold to my coat now,” Tam ordered. “I’d have you hold my hand but I can’t with the cases. One of those luggage men tried to take them from me, if you’ll believe it. I won’t go letting someone else carry our things to who knows where. You stay close now.”

“Why don’t you walk at my side?” the Professor suggested.

He ushered them carefully through a small maze of galleries full of shops, and up an ornate iron stair to a tea shop, where he settled the boys at a table on a balcony overlooking the terminal. He ordered tea and cakes for two, then stood. “I will be back in a moment. I’m going to pick up those papers.”

The boys were able, from the vantage of the balcony, to admire the great terminal at their leisure.

“This is as big as the Great Hall in Shandor, maybe,” Jon said.

“Look at all the trains. I bet you could travel anywhere in the world from here.”

“Not to Shandor you couldn’t. You have to go on good honest horseback all the way from Sherard station to get to Markerry and out to our farm. We don’t need trains back home.”

Jon remembered the horse ride to the first train station fondly, but he liked the trains just as well. “I wonder what the next train will be like. Maybe there will be even more cars this time. The Professor says some trains have dozens of cars. That one down there has twenty-three.”

“The next train will be like our last train,” Tam grumbled, rubbing his back. “Rumbly, fast and loud. You’d think a thing going on two rails could travel smooth.”

The tea came then, with an assortment of little cakes that neither brother could find any reason to grumble about.

“Ought we to save some for the Professor?” Jon wondered, a little too late, looking at the single cake remaining.

“I’ve the money from Mum. I’ll stand a second course if he wants some,” Tam decided. Comforted by this decision, they split the last cake between them. The Professor appeared a moment later, carrying in both arms a bundle of papers so thick it made Jon’s heart leap. The Professor insisted on paying the bill, over Tam’s protestations, though when Tam saw what the bill was for tea and cakes for two at the grand terminal he turned a little pale. “Please, gentlemen,” the Professor said, “you are both my guests.” With that he ordered a box of the cakes to take along, and gave them to Jon to carry for safekeeping.

They wound their way back down the staircase and out into the crowd again. Jon was very careful to stay close beside Professor Sheridan, and so it was that he saw the dark ragged boy in the oversized coat deliberately bump into the Professor and snatch his pocket watch.

Jon cried out indignantly. The urchin regarded him with cool defiance, and just as suddenly as he had appeared, he dashed off into the crowd with the Professor’s watch in hand.

“Thief!” yelled Jon. Tam had seen it too, and he dropped the cases and took off after the boy, bellowing.

The Professor lifted a hand and seemed about to say something when an ill-shaved and gruff looking man behind him pulled suddenly at his satchel, setting the Professor off balance and sending the bundle of papers falling to the floor. The gruff man pulled the satchel from the Professor and ran in the opposite direction, leaving a scene of chaos behind him.

The Professor shouted for the station guard, and seemed torn for a moment whether to chase the second thief or stay with Jon. Some station guards saw the man running and gave chase. Professor Sheridan frowned, sighed, and began gathering his scattered bundle of papers. Jon stared, distressed, after the man fleeing with the satchel who raced across some open tracks just ahead of a train that was pulling in. As he disappeared behind the moving train, something huge and dark swooped by overhead, sending up a gust of wind along with the rush of air from the train.

Jon stared, looking up as a winged figure in flowing black plunged down from amid the ranks of statuary and swooped low over the crowd. The figure’s wings were big and black, the span of a train car’s length. The face, only briefly glimpsed, was a man’s, unearthly beautiful and calm, still as a statue, with terrible, strange, burning eyes. He was there and gone in an instant, sweeping over the moving train and diving to ground on the opposite platform, invisible now along with the thief. Jon stared around open-mouthed to find the crowd already calming, oblivious to what he had just seen. No one looked up, pointed, or seemed in the least alarmed by the sudden gust of wind kicked up by giant wings.

The train that obscured the thief and the apparition finished pulling out and the opposite platform was visible, empty of anything interesting whatsoever. There were no thieves or winged figures to be seen.

“Did you see? Professor there was . . . are you all right, sir?” Jon looked down anxiously at the Professor, who was on the ground again, not fallen, but retrieving the last of his papers, and one large ebony feather.

The Professor examined the feather with keen interest and glanced up and around, as if looking for something. His brow smoothed and he tucked the feather carefully into an inner pocket of his coat. He rose and dusted off his coat, visibly collecting himself, then lifted his eyebrows in a look of mild apology to Jon. “Quite a day. But it’s all right. We have the important things.” He hefted the papers, and nodded at Jon. “I see you still have hold of the cakes. That’s lucky. Let’s see if we can retrieve your headstrong brother.”

“But Professor, your notes, your research!”

“All in my head, as strong as on paper,” the Professor assured, oddly calm.

Jon admired the man very much for holding together appearances for his sake, but felt the Professor must be very upset about losing all his research, not to mention his possessions. “But you’ve been robbed.”

“It happens,” the Professor answered. “But this time nothing of great importance has been lost. See, here’s your brother.”

Tam jogged back to them, panting. “That little pickpocket was fast. He got away from me, I’m sorry, sir.”

“A man stole the Professor’s satchel!” Jon told him.

“Bloody foreigners!” Tam cried, aggrieved. “What kind of place is this?”

“It’s all right,” the Professor said, his voice still calm and soft. “Let us find our train, gentlemen, before we have any other misadventures.”

Tam caught up the cases and gripped them firmly, looking suspiciously from side to side as he followed close on the Professor’s footsteps. Jon hurried along beside him. “Tam, did you see . . . anything unusual, while chasing that boy?”

“Not unless you count a great lot of clumsy foreigners.”

“You didn’t see, well, anything that looked like a living statue, did you?”

“No reason. I just thought I saw something.” Jon frowned at the Professor’s back and thought of the feather he had picked up. But the Professor hadn’t looked up when the winged figure had passed over, or noticed the wind. No one had seen the man with wings but Jon. I know I saw that, Jon thought. Why didn’t anyone else? 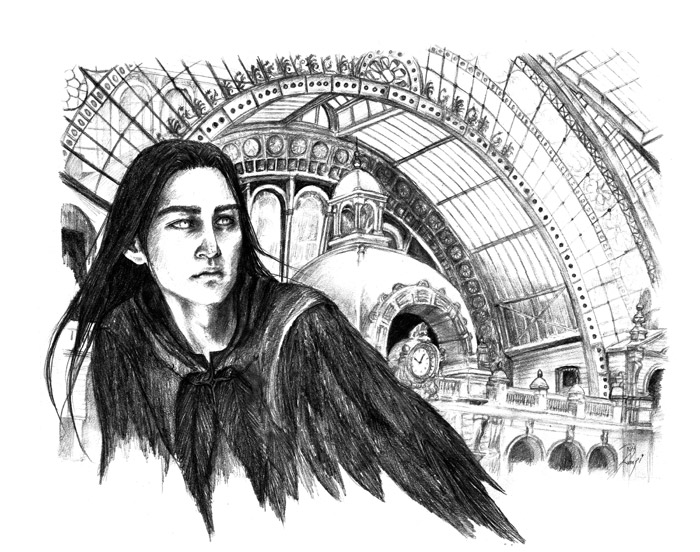