Chapter Eight–What Amazing Events Can Transpire in Half an Hour

The next day nearly all the children had excuses for why they wanted to go into town.  Hellin regarded them at breakfast with an amused but cynical eye.  “If I didn’t know better, I’d think you were all plotting something.”

Jon reddened, and looked down at his plate.

Djaren adjusted his spectacles and gave his mother a grin.  “Did Father and Uncle Eabrey have breakfast early?  They aren’t here.  Are they investigating?”

Hellin looked at her son with her chin cupped in one hand.  Djaren smiled back, sitting up straight. “Very well, I will take you with me.” Hellin said, “I have some errands to run, myself.  And as Corin and Eabrey have business elsewhere, I’d rather have you with me than off plotting on your own.”

Hellin sighed.  “The carriage will be waiting.  Come on.”

The village was no less hot or dusty than it had been on the day of their arrival, only yesterday.  The smells were just as strange and exciting, and in the morning the village was busy.   There was a caravan blocking up the thin twisting streets, so they left the carriage at the edge of town with the driver, a local man with a red turban and what Jon thought was the funny name of Hezdri.

Hellin guided them expertly through the warren of dirty streets, around donkeys and camels, and past nomads in brightly colored layers of robes and tunics.  People carried baskets and rolls of cloth in and out of shops.  Women sold things laid out on blankets or piled up in open baskets.  There were many kinds of foods Jon had never seen or smelled before, and clothes and tools with no clear purpose that he could understand.  People seemed to want them though, as they stood crowding the streets and yelling about the things on blankets.  Jon thought that bartering, as Djaren called it, sounded rather a lot like shouting.  Market day seemed a lot louder and more exciting here than it did back home in Markerry.

Hellin led them past the market and the small groups of grubby children and beggars asking for coins.  They stopped before the tea shop they had visited yesterday.

“All those nomads are the Dashmadi,” Djaren explained. “They’re from the hill country and they live in tents.  We asked some of them to help with the dig, but their people don’t believe in archeology. They say that the ruins belong to the dead, and that what belongs to the dead is forbidden to touch.”

“Though they seem quite practical about it,” Hellin said, rummaging through her bag.  “The Dashmadi believe that only the bad things about the departed stay with their remains, and that all that was light and good and free about them ascends into cloud, and that the best of what came before watches with the clouds, and blesses the people with rain.  It’s a lovely way to think about it.”

Ellea scratched her nose.  “They think graves are haunted by demons made of the baddest bits of people, and if you steal from a grave, or touch a corpse you’ll be cursed, and end up belonging to the dead too.”

“You may see why the Dashmadi don’t always get along with the Alarnans,” Djaren said.

“With all the tomb robbing and so on,” Ellea said.

“Not something to be discussed in public,” Hellin said.  “We’re guests here and should be civil.  You can all go with Anna and get that package from the depot.  I have some errands to run.  I want to see you all back here in half an hour.  I trust you can stay out of trouble for that long at least and refrain from accusing the locals of theft.”

“I know you will, dear.”  Hellin smiled and ruffled his hair.

“We know our way around the village,” Djaren said.

“That’s what I’m afraid of.”  Hellin patted Jon’s shoulder, gave a small bag of coins over to Anna to keep track of, and set off down the street.

“She’s wearing one of her best dresses, and she’s heading for the hotel.  I’ll bet mother is on the lookout for the rival archeologists and other mysterious foreigners.  She can talk information out of anybody.” Djaren grinned.  “That leaves finding the thieves to us.”

“But do let’s get my packages first,” Anna insisted. “My fingers are itching to get that film developed.”

Djaren agreed, and they headed for the depot. 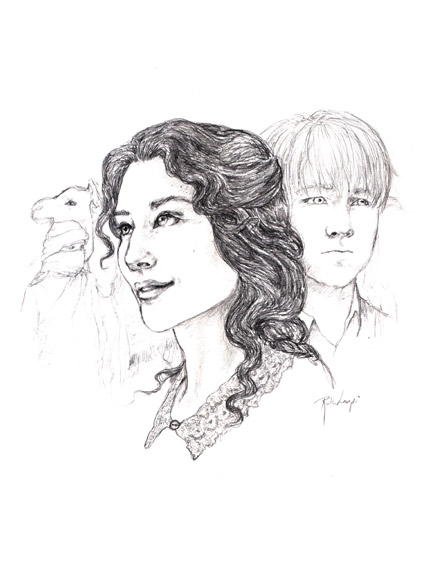 Tam looked about at the merchants as they went, pulling Jon out of the way of a camel at one crowded intersection.  “The Dash people seem to take better care of their livestock anyway,” he observed.  “That camel looked better off than some of the little begging fellows.” He looked at Anna.  “Are the nomads like our K’shay tanna back home at all?”

Anna laughed.  “Well, they don’t build, and only live in cloth or leather homes that can be taken down and carried, but that’s about it.”

“Well, and both cultures have long traditions of warriors and sword fighting, and places one can bring one’s sword.” Djaren said.  “And swords all have names and sometimes get introductions at the door.”

“But that’s just normal, really,” Anna shrugged.  “Isn’t it?  But it’s better to be a girl in the K’shay tanna.  At thirteen, we get a knife, but Dashmani girls just get another scarf they have to wear around their heads.  A knife is a lot more useful, I think.”

“I’ve seen you use yours to mix up paints,” Djaren said.

The depot was a dusty low building that seemed quite crowded, so Anna went in with just Tam to help elbow through, and the others waited outside.  Anna’s package had come, and she stowed it carefully in a large handbag, along with the coin purse Hellin had given them.  The children moved out of the crowds and gathered in an alleyway to discuss their plans.

“We need to find out where the thieves might be hiding,” Tam said to Djaren. “You and I could go look for them.  Anna can watch the little ones in the tea shop.”

Djaren winced. “We’re all safer as a group, really.  And you don’t want Anna or Ellea mad at you.  Knives, remember?  Besides, I have an idea of where to start looking.  You said the pickpocket had Uncle Eabrey’s watch.  We should try the worst of the antique dealers.”

They went first to a dirty looking shop.  It was the same one, Djaren informed them, blushing, where he had attempted to pawn the unwanted pocket watch.

“There were flowers on it,” he explained.  “Pink.”

The ramshackle shop was as dingy inside as out, with piles of objects heaped everywhere from floor to ceiling.  It looked as if some of the stacks were actually supporting the roof.  Some of the objects might have been very valuable, but a lot of it looked to Jon like rubbish.  He only glanced at the antiques for a moment.  A familiar ragged figure stood at the counter having a loud argument with the proprietor, who was easily five times his size, mostly in girth.  Djaren had been entirely right in his choice of places likely to house thieves.  Jon tugged at Tam’s sleeve and pointed excitedly.

“Three silver?  What do you think I am?  Those are real pearls, and worth more than half this miserable pile of refuse you call a shop!”  The pickpocket was berating the shopkeeper.

“You must be mistaken.”  The man spread his fat hands.  “They are small pearls, probably paste.  I am generous to offer you even so much, but I have a heart for small children.”

The pickpocket answered with something unbelievably rude.

The shopkeeper looked up then and saw the newcomers.  His hand closed over the pearls on the counter, hiding them from view.  “Ah!  Little master, are you here to buy a gift, perhaps for your small sister?”  He addressed Djaren, rising from his seat with difficulty and speaking in oily tones.

The pickpocket turned too, annoyed, and stared at them. 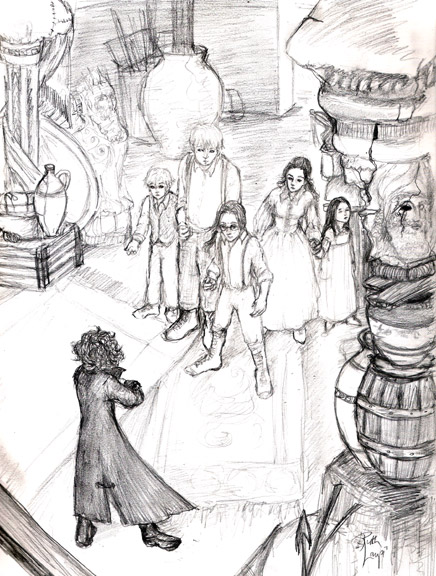 “You deal with thieves. I should report you.” Djaren drew himself up to his full height, still considerably less than Tam’s, and frowned.

“No, no, not at all,” the shopkeeper protested. “This boy, he tries to sell me stolen property, and I send him away. Get out!” He yelled at the pick pocket, and made as if to strike him.

The boy dodged the blow easily, looking very angry indeed. “Pig son of a diseased goat! You have my pearls in your filthy hands, and you will give them back!”

“I have nothing to do with thieves! Get out or I will beat you!” the man cried.

The pickpocket cursed bitterly and rounded on the children, cornered. Jon stepped back. He had never seen anyone look so angry.

“You stole the Professor’s pocket watch,” Tam said to the boy.

“You know who stole the stone at the dig,” Djaren added, “and you’re going to tell us.”

The pickpocket snarled at them. “You are really starting to annoy me. I’ve been having a bad day. Don’t make me spoil yours.”

“But you did.” Jon spoke up. “Your friends stole our research. We just want it back. Please.” He met the pickpocket’s angry black eyes.

“You’re really a hopeful child, aren’t you?” The pickpocket smiled bitterly. “The world isn’t nice. Get used to it.” He wheeled on the shopkeeper. “I won’t forget you. And I promise you won’t forget me.”

The boy vaulted over a pile of trash with amazing speed and darted between Tam and Anna. He kicked at a spot behind Tam’s right knee, sending him sprawling, and wrenched away Anna’s handbag with a deft motion. The boy then eluded an interception attempt by Djaren and leapt onto the counter.

“You ruin my day, I ruin yours.” The boy sprang off the counter toward the back entrance.

“Look after Ellea! Tea shop!” Djaren told Anna, and raced promptly after the pickpocket. The pickpocket swung a quick turn about a support beam and kicked a heavy looking statue into the next beam. The beam cracked and swayed.

“Get out! Everybody!” Tam yelled. He picked up Ellea with one arm, grabbed Jon with the other, and plunged out the front door with Anna at his heels as the whole structure began to give. The pickpocket and Djaren raced off right through the falling building’s back entrance into a maze of alleyways. The fat shopkeeper barely made it out as the whole place tumbled down in billows of dust. He stood coughing and quivering with fury, one sweaty hand gripping the pearl bracelet.

“Tea shop,” Anna said breathlessly, taking Ellea from Tam. “Come on, we have to be ready!”

“For what?” Tam asked, pulling a very startled Jon along after him.

Jon looked back at the swearing shopkeeper for a moment and tried to see where Djaren and the pickpocket had gone. In the swirling dust there was no sign of either of them.