“My word, Jon, I think you are correct,” the Professor said.  “It’s a sealed tomb passage, if I am not mistaken.”  The Professor pointed to a line of carved symbols.  “What do you think of this?”

Jon peered up at the line the Professor indicated.  “That looks almost like the writing of the Ancients, in Shandor!”

“But,” the Professor said, looking at Jon.

“As if someone who did not know it tried to copy it from another source,” the Professor said.

“You’re not saying it’s a forgery, are you?”  Djaren looked alarmed.  “If someone has tampered with the dig–”

“No, I believe this to be quite as real and old as any of this place, only carved by someone inexpert in the letters.  I don’t think the Ancients were native to this place.  This script is, like ourselves, only a visitor.”

“But what does it say?” Anna asked.

The Professor, Jon and Djaren all considered it.  Djaren frowned and examined the other lines.  “The Kardu section says something about a man who slew a god.”

“The Alendi script says the same, I think,” Jon said, pointing to another row of letters.

“Yes.”  The Professor nodded. “But the Ancient reads a little differently.  While a little unclear, this seems to be the word for warrior, not man.  And nothing is mentioned about a god, only a word I think means ‘a powerful evil’.”

“If the scribe didn’t know Ancient, how did he get even that close, though?”  Djaren asked.

“It must have been what was written on the source he copied from,” Jon guessed.  “Someone who did speak or write Ancient must have told him what the words meant, and maybe it got garbled in translation.”

“Perhaps the Ancients visited here.”  The Professor’s eyes shone.  “The original of that text might still be here, somewhere.”

“Behind the door?” Anna asked.

“It looks like you could remove the stone with all the writing on it,” Tam noted, “with a chisel and some ropes.  Then you might be able to see in.”

“But probably not,” Djaren said. “We could remove the stone, but that’s only set into a larger door.  We’ve found two other broken doors so far in the excavation.  If this one is like them, that stone is only a seal.  There would be solid rock behind it.”

Jon winced.  “No, Tam, this is archeology.  We’re trying to save the past.”

“Though you’d be amazed at the means early archeologists employed.”  The Professor smiled.  “There were a few fellows who relied heavily on dynamite.  But then, they were only looking for bronze statuary, and smashed everything else underfoot.”

Behind her, Tam reddened.

“Long careful hours of work will remove that door,” the Professor said, “with good documentation.  We’ll have to try to preserve it whole.  That translation stone in particular is priceless for scholarship.”

“That’s work for us!” Djaren grinned at Jon.  “Your Alendi is better than mine.  Just think, we could be the first to translate Sharnish!”

“We could be published?” Jon asked, wide-eyed.  “Already?  Before I’m even ten?”

“Anna has drawings published,” Djaren pointed out.  “It’s high time we caught up.”

“I want dinner.”  Ellea pulled at Djaren’s shirt.  “Not languages.”

“All right, the door isn’t going anywhere,” the Professor said.

Djaren threw a longing glance back at the door, but obediently picked up the camera equipment and left the door behind.  Jon lingered another moment.  Somewhere in the text, did it tell how to open the door?  The ancestors of the people of Alarna couldn’t have gone using dynamite or teams with ropes to open and close their doors, could they?  There must be some sort of mechanism, Jon thought.

Jon reluctantly followed his brother out of the dig.

Walking back thought the tents in the blistering heat, Jon began to feel the sun.  It was hot on his head and he felt just a little dizzy.  The sand made his feet hot right through his shoes.  They stopped at the Darvins’ tent to leave Anna and the camera.  “I’ll see you at dinner.”  She smiled.  “Mama will want help and I have to wash the dust from my hair.”

Jon tripped once on uneven hillocks of sand and the Professor looked at him with concern.  “Let’s get you in the shade.”

They reached the Blackfeathers’ sprawl of connected tents and Jon and Ellea went in first to take off their shoes.  Coming out of the sun into shade, Jon’s dazzled eyes kept seeing things that weren’t there.  He was pushing off his last shoe when Ellea suddenly bolted across the room with a happy cry.  “Poppa!”

Jon turned a little too quickly, to see only a confusion of burning green fires and streamers of black cloth, hair and feathers on an unseen wind.  For a moment he thought he saw again the strange and inhumanly beautiful man’s face from the train station, but then in a startled blink it was all gone.  There was not a maelstrom of blackness and green fire, just the sitting room.  Hellin sat in an armchair, and in the center of the room stood a tall man in flowing black robes who was even now picking up and spinning Ellea with a weightless grace.  She shrieked with happy laughter.  Doctor Blackfeather was as confusing in real life, Jon thought, as he was in the photograph.   Something about him would not stick in Jon’s mind.  There was some resemblance between the children and their father, Jon saw, but he could not quite remember what it was.  He thought Doctor Blackfeather looked young, but then he instantly wondered if he was in fact quite old.  He frowned and blinked again, feeling stupid for being affected by the heat like this.

“You’re home!” Djaren also pelted across the room and stood before his father, grinning.

The Professor, now in house sandals, smiled warmly at Doctor Blackfeather.  “Corin, it is so good to see you!”

Looking again at Doctor Blackfeather, Jon’s vision at last cleared.  The Doctor’s eyes were jet black, as were his clothes, in an exotic mix of native and gentleman.  He wore flowing robes like the men of Alarna, but underneath those his clothes were a more elegant, severe and up to date version of the Professor’s.  He seemed to wear a lot of layers and not mind the heat.

Doctor Blackfeather greeted the Professor with a warm handshake, and Jon could see them both quite distinctly.  Doctor Blackfeather was taller than the Professor by quite a bit, with an oddly ageless face that seemed at once familiar and strange to Jon.  His long black hair and robes seemed to move almost weightlessly as he set Ellea down on a chair, and then settled himself on some floor pillows, northern style.  Even sitting, he was tall.  Perhaps, Jon considered, Dr. Blackfeather was originally from one of the very far northern clans of Shandor.  He might be from one of those old mysterious places still half cloaked in mist and old folk stories about sea birds that talked in riddles, and creatures in the dark pines who could take on many shapes long, long ago.  He might be from clan White Gull maybe, or New Starfire.  Dr. Blackfeather felt somehow like a story Jon had heard once and forgotten.

The Professor and Djaren were both excitedly speaking of the new discovery, and Dr. Blackfeather had not yet said a word, but he smiled, and the smile reminded Jon of one Tam gave him sometimes.

Hellin stood and came over to take a hard look at Jon.  “Let’s get you some water.  Come have a seat.  There’s a nice breeze from the shady north that will do you good.”  Jon allowed himself to be led over to the armchair Hellin had occupied, and settled into it with a cool cup of water and a damp towel round his neck.  Tam, protesting, was given the same treatment and installed on an adjoining divan.  Jon grinned at his brother, noting his fine sunburn.

“Don’t you boys have hats?”  Hellin asked them.

“I dropped mine, I think,” Tam apologized.

Doctor Blackfeather shifted to finish the circle in which they were now sitting, and nodded at each of the brothers in turn.  “Jon, Tam, it is good to meet you at last.  I am sorry I was unable to welcome you at the station.”  The Doctor’s voice was low and soft, with a Shandorian accent as thick as Tam’s.  Jon felt more comfortable at once.  He wasn’t sure what kind of voice or words he’d been expecting.  Nothing so warmly human, he thought.  The Doctor might have sounded like the sea, or wind through canyon walls, or like falling water.  Ellea claimed a place in the Doctor’s lap, Djaren took a seat beside him, and the Doctor transformed into an ordinary father.

“I had notes for you,” Professor Sheridan said, “I’ll need to reconstruct them.  I’d half forgotten, what with seeing the new texts here.”

“I have good news for you about that, Eabrey,” the Doctor told the Professor.  Doctor Blackfeather reached into his robes, and brought out, as if by magic, the Professor’s satchel.

“The authorities recovered it,” Tam said.  “Well, that’s some good come of that mess.  Did they find the pickpocket too?”

“Only a pocket watch.”  The Professor waved dismissively.  “These are what I have missed.  My notes!  Thank you, Corin.  Thank you very much.  I was dearly missing these.  I did hope . . . and you did.  Thank you.”

“I should have traveled the whole way with you,” Doctor Blackfeather said.

Jon shifted in his seat so that his feet could touch the floor, and in moving found something stuck between the cushions.  It was a large dark feather.  He looked at the Doctor.

Doctor Blackfeather watched him back.  “I am glad to have you here, Jon Gardner.  Your essay was very well thought out, and shows you to be remarkably observant.”

“To see things clearly is a great gift,” the Doctor said, holding Jon’s gaze in his own.  His eyes were not completely black after all.  There was green in them, deep and burning.

“He really is quite observant,” Djaren said.  “He saw right away that the carvings were part of a door.  He’s going to help with the translations.”

“I think he will be a great help here,” Professor Sheridan added. “He has an eye for detail and a head for mysteries.”

“Well, next time you are all out deciphering mysteries in carvings you will kindly remember to use a sunshade and wear hats,” Hellin said. “Now, dinner won’t wait, and you can’t all sit down covered in dust and old bones.  Go get cleaned up.”

They all trooped out obediently, leaving the Doctor and Hellin Blackfeather alone in the sitting room.  Jon heard them speaking together in hushed voices as he left the room but could not make out the words.  Hellin had moved from her chair to sit quite close to her husband, and they leaned in to each other, his hand lifting to touch her copper hair.  With a twinge of homesickness Jon missed his own parents.  He straightened up resolutely and followed Tam to their room.  This summer was going to be exciting.  There was no time to be small or homesick; he was going to be a scholar now, and maybe even published.  That thought alone made him dizzier than the sun had. 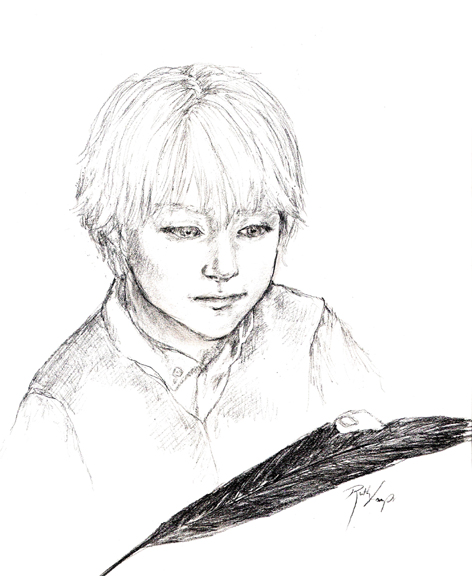