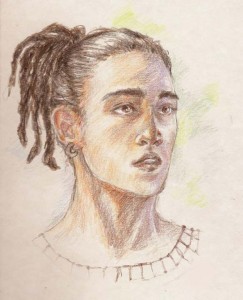 Tiiro shrugged. “I didn’t care for fishing. I liked the port at Shiahan. There was a tea shop, and then there was the mage school. I had some money in my pocket that day, so I enrolled. It’s easier to travel on the wake sometimes. You can lay back and watch the clouds, and see where you drift. I mostly just do that.” 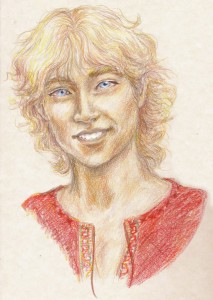 “Ho, long jaws! Women and children are small eating. Face me!” Neharu threw the river stone hard at one of the beasts who was chasing the boy. The stone smacked the side of its head and it stumbled. Both the Coatau nipping at the boy and the three from the base of the tree swung their snouts round to sniff at Neharu. They all began to growl. Neharu smiled at the very surprised people he had rescued, and almost waved. Then he saw that the angry looking Coatau had indeed decided to face him, all at once together.

Neharu considered, as the first one lunged at his throat and caught his upraised arm instead, that maybe he should have found a weapon of some kind before announcing his arrival. He punched it hard in the face with his free arm and kicked another of them in the ribs before it bit at his leg. If I am torn limb from limb by monsters, that would be stupid of me, Neharu thought, as he was buried under snarling Coatau. 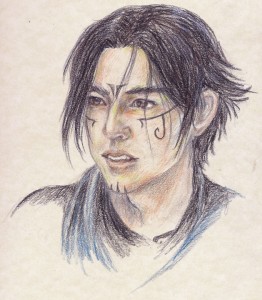 Kai gritted his teeth and ignored Lynx. Just give me your strength and shut the hell up.

The creature slammed into him and he was crushed against the wall, his skin burning away beneath its touch. At the same time, an entirely different sort of burning engulfed him, the rush of power that his beast spirit only gave him at times like this. He felt intensely alive. He felt intensely in pain and he didn’t care. His knife hand plunged into the creature’s chest, just beside its heart. The acid ate away at both knife and hand, but before he lost all feeling in his fingers he found something that was neither muscle nor heart nor bone, and forced his hand to close around it. Then he yanked it out.

This entry was posted in Gallery, Madrahar and tagged portraits, snippets. Bookmark the permalink.