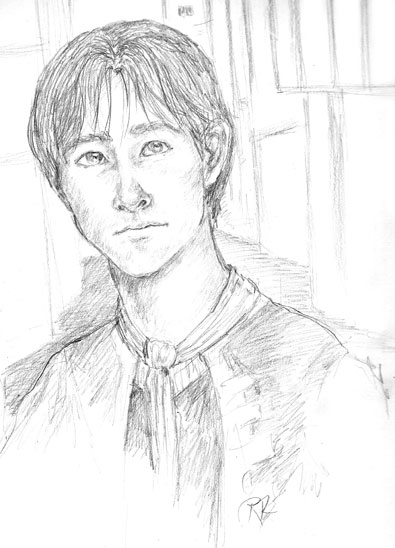 David trudged back from University through the narrow streets and alleyways of the Dockside Quarter of Logansburg, capital city of Arien.  His scholar’s robe was carefully rolled and stowed in his pack, and he always changed from his good blue coat to the old brown one with the patched sleeves before he headed back to the flat.  No point standing out more than he already did.  He’d almost managed to shed his Shandorian accent; his friends at University told him he only sounded like a peasant from the provinces, now.  It was perfectly acceptable, in Dockside, to sound like a peasant.  A foreigner, however, or someone stupid enough to put on airs by attending University . . .

Nothing to see here, nothing at all.  Just a good son coming home from work, and not with too much money in his pockets, either. When he reached Crawder’s Row, and smelled that particular combination of fish, sweat, and animal blood, he swung two streets over to cut through Lowmarket instead.  He’d been jumped by thugs once, behind one of the butcher’s shops, before he figured out that it was a bad idea to wear his robe in Dockside.  He’d carefully avoided that spot ever since, though the law of averages said that the next time someone decided to rob him it would most likely be somewhere else entirely.

It wasn’t late yet, but the sun had already sunk behind the tall, narrow buildings—living in Logansburg was like being permanently stuck in a steep-sided valley—and the air was chilly for a summer’s evening.  David retreived a penny from an inner pocket and his tin cup from his belt, and bought a ladle’s worth of weak tea from the old woman with the kettle who always stood on this particular corner.

“Thank you,” he said, and dropped a spare half-penny into the woman’s apron.  He had a decent tutoring job now, thank the One, so it wouldn’t be road repair for him again this year, in the heat of summer.

Maybe if I can save enough money, he thought, maybe next year after I finish at University.  Just for a few weeks . . .  Home? That was next door to impossible.  He didn’t dare think on it too long, only let it rest somewhere deep in his mind.

The tea was nice and warm, and he wrapped both hands around the cup.  After the public fountain, with its gaggle of boys with yokes and buckets and women with washing—a quick glance told him Mother wasn’t there—he dodged three streets over to Alewives’ Way, to avoid that unmarked line where laundry houses gave way to less reputable houses.

An overloaded wagon of barrels trundled by, down toward the docks, pulled by two tire-looking horses.  David stepped off to the side of the narrow road to let it pass.  The smaller, faster cart bearing a mysterious crate big enough to hold a church bell or a printing press, or maybe even a ship’s cannon, wasn’t as polite.  The cartman cracked his whip above his team of six, urging them forward to squeeze past the barrel wagon.

David edged further out of the way, avoiding the nastiness in the gutter.  He edged rather quicker when he saw the four men in the High King’s livery, with pikes and unstrung bows across their backs, who marched behind that cart.  Maybe the crate really was a cannon.

He ducked under the overhang of a shop whose sign advertised lamps and lamp oil, out of range of the curses, and possibly blows, that were liable to break out if the carts collided.  By squeezing along beneath the overhangs, he made it nicely out of the way and into the next street, only spilling a little of his tea.

A red-faced woman emerged from a steaming doorway with a basket of laundry.  “Drop these off for your mother, would you?  She’s cleverer than me with delicates, and some of the lace needs mending.  Make sure you tell her that.”

“Yes, Missus Hanley.”  David hefted the basket up onto his shoulder.

“And tell her I need them done by tomorrow.”

David nodded, and managed to balance the laundry and swig the rest of his tea without spilling either.

A few more turnings, and he rounded the corner of his very own alleyway.  Perched about on the rickety stairs and piles of rubbish was the usual collection of urchins, one brandishing a rusty knife he’d probably fished out of the river.  David’s little brother, Micael, swung a broken bit of planking like a club.

“Awright,” the knife-wielding boy shouted, jumping down from a rubbish-heap.  “Awright, this here’s our alley, and we charge a toll to go through it, see?”

David set down the laundry, to get a proper view of the children dancing about down by his knees.  Micael abruptly hid his stick behind his back.  “Um, hullo David.  We didn’t see it was you.  Of course family don’t pay the toll.”

“Well, not big family,” the knife boy said, squinting up at David.

“How much have you made so far?” David asked, curious.

“Bille’s little sister give us a glass bead.”  One of the boys fished it out of a grubby pocket and displayed it proudly.  “And some dumb errand-boy come through here, and he paid us half-penny.”

“Course he won’t,” Micael put in.  “He’s my brother and he’s got honor, see.  And don’t tell Mum,” he hissed as David headed up the stairs to their flat.

“Just watch who you go waving knives at,” David told him.  “Not everyone will take that so kindly, you know.”

“But I don’t even have a knife,” Micael called.  “Dad says he gave you a knife when you was my age.”

“I didn’t rob people with it,” David said over his shoulder, from the second story landing.  His family rented the second through fourth stories on this side of the building; a kitchen, a bedroom above that, and an attic room for Micael and David at the top.

Well, it wasn’t as many steps as he’d once climbed to get to his old room in the High Tower.  “Mother!”  He dumped the laundry beside the half-barrel tubs.  “Are you upstairs?”

“David.  You’re home.”  Meredith’s voice came down through the trap door, and then she herself appeared, climbing down the ladder, tucking an embroidery hoop into one of the pockets of her apron.  “The light’s better above,” she explained.  “Though I would have had to give it over soon, regardless.”  She pulled him close in a hug, her head resting for a moment against his shoulder.  “I’m glad you’re back before dark.”

“You don’t need to worry, Mother.  I can look after myself, you know.”

She straightened and looked up at him with tired eyes.  Stitching in the bad light.  And you always tell me not to read without candles, never mind the expense. Surely he had some spare candles in his school trunk?

“Of course you can look after yourself,” she said.  “You and your father both.  That doesn’t mean I have to approve.  Sidestepping trouble is better that ramming your head into it.”

David nodded.  He thought of his circuitous route back from school and, on the other hand, all the things he never mentioned to the nobles whose children he tutored in grammar and rhetoric.  Neither he nor his father ever wore a sword publicly any longer, though Wehryn did carry a stout cudgel.  “Will Father be home soon, do you know?”

“I hope so.”  Meredith stooped to begin sorting the laundry David had brought.  “Take the soup off and put the wash water on, will you please, David?”

He stoked the fire in the grate, filled the big laundry kettle from one of the tubs, and swung it out over the hottest part of the flames.

“The soup should be hot enough,” Meredith said.  “Maybe I should call Micael in.”
“He’s just playing in the alley.  He’ll be fine,” David said hurriedly.  Their rooms seemed twice as small with Micael tearing about in them.  “I was never that—”

“I was going to say stupid. He has no sense.”

“Hmm.  I seem to recall you and Corin getting yourselves lost in the mountains, several times over.”  Two bowls and a ladle appeared on the table.  “Not to mention how you frightened yourselves half to death playing at wars with the honorless.”

David fetched soap and the scrubbing-board.  “Corin was never afraid of anything.”  The thought he had shoved away surfaced again.  “Do you suppose . . . ?”  He stopped, considering money.  His tutoring brought in more than either Meredith’s embroidery and laundry or Wehryn’s construction work.

“Has Father said anything lately?” he asked instead.

“He’ll be a grown man now, with children maybe, and responsibilities.”

“So did your father, and neither of you stubborn Shandorians are going to change your minds, are you?  Please don’t ask him about it.  He’s seemed a bit better, lately.”

To that, David had nothing to say.  No, Wehryn hadn’t given any Arienish nobles bloody noses lately.  If that amounted to “a bit better” . . .  David tried to consider his father’s situation as a logic problem, of the sort he puzzled over in his classes at University.  Condition A led in some sensible fashion to condition B, and so on.  Swordmaster at University, to leatherworker, to bartender, to the ever-available road repair, or dock work.  The progression seemed a prime example of the philosophical theory that all things spiral downward into decay.  David, personally, had always preferred the opposing theory where the world marched onward to higher forms of civilization.  He wasn’t sure he could logically defend his preference.  He simply found it more cheerful.