At first sight, the man in the tree might have been mistaken for a scarecrow.  Gavin Sheridan was the tallest man in Greendale and possessed the sort of body the charitable might term “loosely built.”  His ears were a size too big, his nose beaky and amiable, and his smile was set on crooked.  Angles that ought to have been flinty were turned to gum-rubber by his grin.  Straw colored curls crowned the scarecrow image, and the outgrown clothing confirmed it.  Today, with the acquisition of a new title, the grin had become permanently entrenched.

Captain Sheridan.  It has a good ring to it, Gavin decided.  And folk thought I’d not amount to anything. In addition to being a half-savage, a clever rider, and downright learned, he had become a captain through blind luck.  Having studied some military history, Gavin did not find this sequence unusual.  He grinned and, with a good swing, climbed higher into the tree.  He needed a point from which to aim.

The problem with a Ryn’s Crimson apple tree in winter was its lack of leaves.  No leaves meant no cover, and cover was terribly important when engaging in short-range missile warfare.  All good captains knew this.  Gavin Sheridan told the tree so, but it wasn’t listening.  Perhaps it imagined that gangly captains who swung upside down from its limbs were unreliable.  It was likely a respectable sort of tree, and embarrassed by such behavior.  A very Greendalian tree, as seemed appropriate.  Gavin had nothing more to say to the tree.  He was trying to keep hold of a half-dozen snowballs.  Another inconvenience—apples would be easier, and wouldn’t go to bits in one’s pockets, but the tree wasn’t offering any apples at this thankless time of year.  Just as well, really; snowballs were good and cold and slithered nicely down coat-collars, and Gavin’s target needed cooling off.

Keeping the other three Greendale militia members in check was a responsibility Gavin cherished.  Since he would be losing this cherished responsibility shortly, it seemed only right that Captain Sheridan should leave in style.  Gavin took it in hand, as a good captain should, to mete out a final lesson on priorities.

Travers had been Gavin’s best friend since childhood, so it was doubly Gavin’s duty to save him from the flaws of his character.  One of Travers’ flaws had him trapped in her dire clutches now.

All the sap in the orchard was welling in the two young hearts, side by side in the snowy bower below.

“Ooh, Travers.”  Cristene Applefield cooed like a peahen, in the arms of the flawed Travers Lautin.

“You are summer to my eyes, a rose in the bitter snow.  Winter dare not chill thee, for thou art Spring incarnate,” Travers whispered, exhibiting, to Gavin’s great shame, his other terrible flaw.  Bad poetry.

“You say the prettiest things.”  Cristene wrinkled her upturned nose, encouraging a kiss from the all too willing Travers.

“I speak them to the prettiest lady.”  He smiled a really awful smile.

It was clear to Gavin that Travers needed immediate rescuing.

The advantage to be had from great and awkward height is length of stride.  Length of stride is terribly important when you are running away from your very short but irate best friend.  Gavin dodged between apple trees, out of breath more from laughing than running, and feeling twelve again, rather than the respectable twenty Joanna always told him he should be acting.

“Damn it, Sheridan, I am going to kill you!”

Gavin bent nearly double with laughter midstride, choking on snow, woolen scarf, and pure glee.  He was having a rewarding day.  “Ooh, Travers!” Gavin managed, in Cristene’s voice, between fits of laughter.

“You are going to die!”  Travers panted, weaving doggedly after him.

“As soon as I am able, my sweet goddess.”  Gavin used Travers’ voice this time.  It was a testament to his skill that he managed this while vaulting the low stone wall that marked the orchard.

“Damn it–how long were you–bloody–you are dead!”  Travers reached the wall, and puffed and swore his short-legged way over it.

Gavin lagged, to answer, and let his friend catch up a bit. “Not long, but long enough.  Ye gods, a man’d get sick listening to that.”  Then, “Hey!” as a snowball hit him squarely in the back.

Travers was unsportingly attacking him.  Gavin spun and grabbed a handful of snow, looking for Travers.

Another snowball caught him in the leg just before he was ploughed over into the snow.  Gavin located his scarf beneath him, and took Travers by surprise with a good snap of its snow covered length.  He used the distraction as an opportunity to tumble his friend over.  After some scuffling he came out triumphant on top, with Travers tangled in the scarf, again spitting snow.

“It’s a sad day, Travers Lautin, that’s all I can say.  A sad day indeed, when you’d leave us–your friends–and a good mug of beer, for some ‘sweet goddess’ in a damn freezing orchard and make me have to come and fetch you.”

“Unh.  My friends.  Aye, right.”  Travers came up with a beautifully aimed fistful of snow for Gavin’s face.  The conversation degenerated once again into a free-for-all.

When the two disheveled combatants at last reached the town gates they were both thoroughly soaked, and both acting twelve. 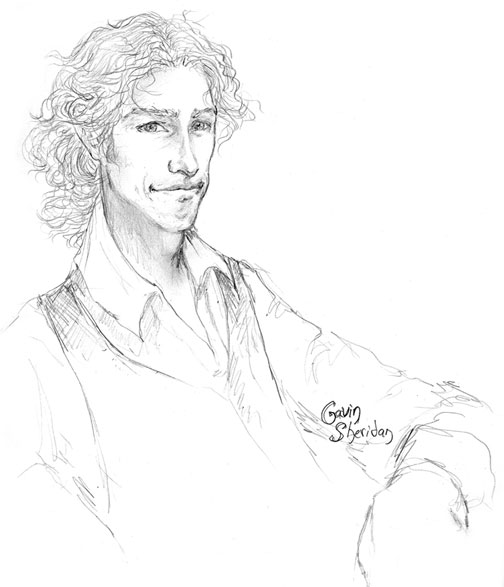